Iran to Syria: Save regime and preserve alliance

AP: Two weeks after Egypt’s uprising swept aside Hosni Mubarak, the presidents of Iran and Syria stood side by side in Damascus in a blunt message to the Arab Spring: The Syrian regime can count on its allies in Tehran. 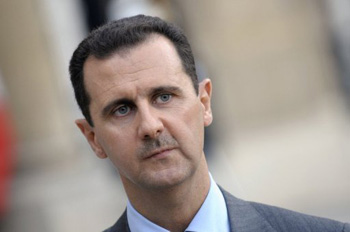 DUBAI, United Arab Emirates (AP) — Two weeks after Egypt’s uprising swept aside Hosni Mubarak, the presidents of Iran and Syria stood side by side in Damascus in a blunt message to the Arab Spring: The Syrian regime can count on its allies in Tehran.

Seven months later — and after at least 2,700 deaths in Syria — Iran is tweaking its big brother role for Syrian President Bashar Assad. The Iranian leaders are now urging him to consider talks with protesters or risk heading down a path with few escape routes.

It’s Tehran’s version of tough love: Pressing Assad to do what it takes to stay in power and preserve one of Iran’s most important relationship in the Middle East.

“You have a decades-old strategic alliance on the ropes,” said David Schenker, a Syrian affairs analyst at the Washington Institute for Near East Policy. “No doubt Iran is very concerned.”

But Assad appears to be following his own rules in trying to ride out a mass revolt that has now spread into the security forces. Government troops have waged relentless crackdowns on opposition protesters, as well as police and soldiers who have turned against the crackdown.

Iran is in the unfamiliar role of nervous bystander in Syria — a foothold on Israel’s border and a critical conduit to Tehran-backed Hezbollah in Lebanon and Hamas in Gaza.

Syria also adds to Iran’s worry about inspiration for its own internal opposition, which has been mostly dormant since the Arab revolts began in Tunisia.

There is little chance Iran would risk the international fallout and send large-scale military forces to aid Assad, although it’s likely that Iran has boosted its cadre of security advisers and other envoys in Damascus. Instead, Iran seeks to coax Assad to offer some kind of tension-easing dialogue or at least pull back on the attacks.

Any concessions by Assad could open the way for eventual deep reforms in his authoritarian rule. But Iran would gladly take a weakened Assad over the uncertainties under a new Syrian leadership, which would likely put Assad’s Iranian-oriented Alawite minority into a political deep freeze.

“There’s currently no change in Iran’s support for the Syrian government,” said Ahmad Bakhshayesh, a political science professor at Tehran’s Azad University. “However, Iran is trying to convey the message … that Assad is capable of carrying out reforms.”

That could be a tough sell under the current crackdowns and international backlash.

On Thursday, Syrian troops continued their offensive in the opposition hotbed of Rastan in central Syria. At the United Nations, a European-backed proposal in the Security Council is pressing for expanded sanctions on Syria.

Neighboring Turkey, meanwhile, has imposed an arms embargo on Syria and has hosted anti-Assad opposition figures.

Assad still has powerful friends such as Russia and China in his corner. Yet there could be a limit to how much they would jeopardize their political credibility — and deep business interests — among the rest of the Arab world that has largely abandoned him, said Osman Bahadir Dincer, an analyst at the International Strategic Research Organization in Ankara, Turkey.

In the end, Iran’s voice could resonate the loudest. And it is telling Assad that he can’t rely only on force and intimidation — ironically the formula used by Iran to dismantle protesters after the disputed re-election of President Mahmoud Ahmadinejad in 2009.

Earlier this month, Ahmadinejad said “there should be talks” between Assad and the opposition. “A military solution is never the right solution,” he told Portuguese broadcaster Radiotelevisao Portuguesa in an interview in Tehran.

He later offered to host a regional meeting of Islamic nations to seek resolutions to the Syrian crisis.

An Iranian newspaper, Shargh, reported earlier this week that about 200 prominent Iranian doctors, including a former health minister, sent a letter to Assad to end the “regretful” violence. Assad is a British-trained eye doctor.

Efforts to break Iran’s influence in Syria has been a Western policy goal for more than a decade. Assad had been viewed as more reform-minded than his father, Hafez, who ruled for nearly three decades and died in 2000.

In 2007, then-U.S. Sen. Joe Biden said Washington should press hard to end Syria’s “marriage of convenience with Iran.” Last year, U.S. Secretary of State Hillary Rodham Clinton said the appointment of an American ambassador to Syria — after a five-year absence — was part of efforts to “hopefully influence behavior” in Assad’s regime.

On Thursday, Assad loyalists pelted the U.S. ambassador, Robert Ford, with tomatoes and then tried to storm an office where he held a meeting with an opposition leader, Hassan Abdul-Azim.

The Arab Spring uprising could accomplish what diplomats had tried to nudge along: a new leadership that’s redirected toward the West and moderate Arab states. The new, fast-moving realities of the region were once applauded by Iran, which relished the fall of pro-U.S. governments in Tunisia and Egypt and have shed no tears with the mercurial Moammar Gadhafi on the run in Libya.

“Syria changes all this for Iran,” said the Washington-based analyst Schenker. “It would be a staggering blow to lose Assad.”

It also would potentially shrink Iran’s Arab world sphere to places such as Iraq, where it has close ties with Shiite political factions and militant groups, but is limited by rival Sunni groups and Baghdad’s links with America.

A former senior State Department official, Nicholas Burns, portrayed Iran’s calls for peace efforts in Syria “as cynical attempts to somehow convince Arabs that Tehran is on the right side of reform.”

“If Assad falls, it might even lead the reform movement in Iran to conclude that its government was vulnerable, too,” said Burns, a professor of diplomacy and international politics at Harvard’s Kennedy School of Government. “In general, Iran is more isolated now than it was a few years ago and is a potential regional loser as a result of the Arab awakening.”