Washington Post: Iran quietly hosted a delegation of Taliban members in Tehran this month in a powerful and unusual signal of its ambition to shape the trajectory of the Afghanistan conflict as U.S. troops begin to withdraw. 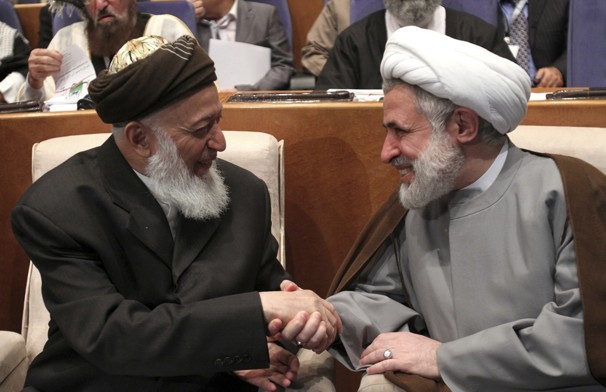 KABUL — Iran quietly hosted a delegation of Taliban members in Tehran this month in a powerful and unusual signal of its ambition to shape the trajectory of the Afghanistan conflict as U.S. troops begin to withdraw.

Iranian officials had apparently hoped to facilitate a meeting between the delegation and Burhanuddin Rabbani, a former Afghan president and leader of the country’s reconciliation efforts, who was attending the same conference in Tehran, his associates said. Although that did not happen, the presence of the Taliban members suggests Iran has cultivated deeper ties with the insurgent group than was previously known and is stepping up efforts to influence its eastern neighbor as the U.S. role recedes.

The relationship between Iran and the Taliban’s central leadership has long been deeply fraught; when the Taliban was running Afghanistan in the 1990s, the two countries came to the brink of war.

U.S. officials have for years accused Iran of fueling the Afghanistan war by providing training and sophisticated weapons to its favored insurgent commanders, although they have described Tehran’s role as minimal compared with other regional players. There have been few signs of senior-level contact between the Taliban and Iran.

Hosting Taliban members at the Tehran conference might have been an attempt by Iran to mend ties as it becomes clear that the group will be a major power broker in Afghanistan after the United States withdraws its last combat troops as scheduled in 2014, analysts said. U.S. officials have launched their own initiatives to talk to the Taliban, to little avail.

“Iran considers itself a regional player with a legitimate stake in Afghanistan, and it doesn’t want to see progress that runs contrary to its political interests,” said Michael Semple, who has decades of experience in Afghanistan as a diplomat and a scholar. “If the price of Iran having a role in the next step is dealing with the Taliban, then they are prepared to do it.”

Reports of the Tehran meeting came as U.S. efforts to promote a dialogue between Afghanistan and its eastern neighbor, Pakistan, appeared to falter Thursday. The Afghan government canceled a meeting with its Pakistani counterpart that was scheduled for next week, part of a U.S.-promoted effort begun early this year to assuage long-standing distrust between the two countries, U.S. officials said.

The Obama administration has asked Pakistan to assist the reconciliation process by eliminating Taliban havens in its territory and pressing the insurgents toward negotiations. But recent high-profile attacks in Afghanistan by the Pakistan-based Haqqani group — for which the United States has publicly held Pakistan at least indirectly responsible — have stirred Afghan antagonism. U.S. officials confirmed the cancellation, first reported by the Wall Street Journal, but said they anticipated that the break in dialogue would be only temporary.

The Islamic Awakening conference in Tehran was organized by Iran’s supreme leader, Ayatollah Ali Khamenei, who has the final say in the nation’s policies. The conference, held in mid-September, drew more than 700 scholars and Islamist political figures from around the world.

The Afghan government was represented by Rabbani, who a year ago was tasked with leading Afghanistan’s High Peace Council. Days after attending the conference, Rabbani was slain by a man posing as a Taliban negotiator. The two events do not appear to have been linked.

Council members say they have made virtually no headway in starting peace talks because the Taliban has shown little interest in a negotiated settlement to end the war. But the Tehran conference marked an unusual opening. Arsala Rahmani, a member of the council who traveled to Tehran with Rabbani, said he was startled when he saw Nik Mohammad, a former colleague from their years together as Taliban government officials.

“They seldom come to public events, and when they do, they use aliases,” said Rahmani, who served as deputy education minister when the Taliban controlled Kabul in the late 1990s.

Rahmani said he and Mohammad shook hands but exchanged nothing beyond pleasantries.

“It was not in the typical way Afghans use to greet each other,” he said. “It was done in a very cool manner.”

Rahmani said Mohammad, who was heading the small Taliban delegation, is an influential insurgent leader who is in contact with the top members of the group’s ruling Quetta Shura.

Semple said that although Mohammad is on a U.N. terrorist sanctions list, there has been little public evidence suggesting he is actively involved in running the Afghan insurgency. Mohammad served as deputy commerce minister during the Taliban regime.

Waheed Mozhdah, a political analyst who was with Rabbani’s delegation, said he first learned about the Taliban representatives as he leafed through the conference program and found two names he recognized. The men were listed as representing what was described as the American Opposition Front in Afghanistan: Nik Mohammad and Tayeb Agha.

The latter is an aide to Taliban leader Mohammad Omar and reportedly held talks with U.S. officials this year in Qatar and Germany. Agha apparently stopped talking to Western officials after his role in the talks was disclosed. None of the members of Rabbani’s delegation said they saw Agha, but two noted that some members of the Taliban contingent hid their faces with scarves.

At one point, Mozhdah said, the Iranian hosts asked Rabbani’s team whether it would object to giving the Taliban representatives an opportunity to make public remarks.

“There were various opinions,” said Mozhdah, who worked in the Afghan Foreign Ministry during the Taliban’s reign. “One side said, ‘Let them come and express what they have to say.’ ”

Mozhdah said he objected, arguing to Rabbani that such a move would “damage the relation between Kabul and Tehran.”

The Iranian hosts suggested instead that Rabbani make time to speak privately to the Taliban representatives on the sidelines of the conference, Mozhdah said. In the end, no such discussions took place, said members of Rabbani’s team.

“We feared that if we were to do so, it would show our weakness,” said peace council member Qazi Amin Weqad, who also attended. “We were also scared of getting a negative response, such as, ‘You need to talk to the Quetta Shura.’ ”

A State Department spokesman declined to comment on the Tehran conference. Administration officials have said that Iran has a legitimate interest in Afghanistan and a role to play in promoting regional stability. As part of its own efforts to promote Taliban reconciliation, the Obama administration has sent senior emissaries to all of the countries bordering Afghanistan, except Iran.

Iran, a predominantly Shiite nation, supported the Northern Alliance as it fought the Taliban during the 1990s. The Taliban, a hard-line Sunni organization that was in power between 1996 and 2001, came close to war with Iran in 1998 when a number of Iranian diplomats were killed in Afghanistan.

When U.S.-backed Northern Alliance forces toppled the Taliban in late 2001, Iran began to broaden commercial and diplomatic ties with Afghanistan. Iranian leaders have become concerned in recent years that Afghanistan’s insurgency and illicit drugs could spread beyond its western border into Iran.

The presence of Taliban members at the public conference in Tehran appears to have received little notice in Iran, or beyond. But even the limited coverage it got in Iran provides insight into why Iranian leaders decided to invite a Taliban delegation.

An article that appeared Saturday on the influential Iranian news Web site Khabar, which is supportive of the supreme leader, described the presence of Taliban and Afghan government representatives at the conference as a watershed moment.

“Officials who had never gathered in one place were now discussing current issues of the area together,” the article said.

Referring to the U.S. talks with Taliban representatives this year, the piece said: “It should be noted that the radical forces in Afghanistan have not accepted mediations from [the] West.”

Daily Telegraph: Israel reacted with anger yesterday to a...

AFP: A top cleric on Friday vowed that Iran...