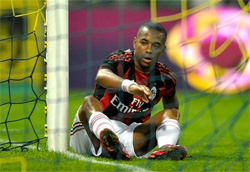 The federation will issue a final verdict next week on Mohammad Nosrati, who appeared to briefly put his hand between the buttocks of Sheys Rezaei as Persepolis players huddled together to celebrate a goal against Damash Gilan in a televised match on Saturday.

The gesture might have caused little comment in the West where fans are used to “laddish” behaviour by soccer stars, but it caused some outrage in the Islamic Republic.

Jalal Yahyazadeh, a cleric and member of parliament, said the “shamelsss act” had “upset, angered and outraged” all sports fans and that the sports minister should be held accountable.

“What happened is absolutely not acceptable because it was a very ugly thing,” he was quoted as saying by ISNA.

After the incident made headlines in some international media and with a clip available on the Internet, the federation’s media committee met on Tuesday and “demanded that elements who damaged the country’s sporting spirit be dealt with firmly,” the semi-official Fars news agency reported.

Soccer is the most popular spectator sport in Iran, although women are barred from attending matches.