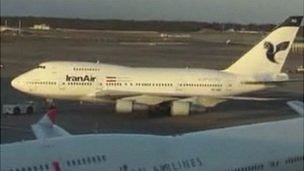 A Kent airport has stopped allowing aircraft from Iran’s national airline to make refuelling stops on return journeys from Heathrow.

Kent International Airport at Manston said it made the decision in the last week amid the worsening diplomatic relationship between the UK and Iran.

Chief executive Charles Buchanan said the decision was the “right thing to do” for ethical reasons.

Iran Air had been refuelling at Manston airport for several months.

Although its flights were able to land at Heathrow, they could not refuel there because US sanctions prevented Iran Air dealing with companies that had links to America.

Manston, owned by Infratil, has no American trade connections.

Mr Buchanan said the airport had not breached any sanctions and that all the aircraft which landed at Manston had been cleared by the Civil Aviation Authority.

The decision to stop refuelling Iran Air planes was made before this week’s closure of the British embassy in Tehran and Iranian embassy in London.

“As a commercial enterprise this was a profitable exercise for us but the sensitivities of dealing with Iran have changed,” said Mr Buchanan.

“We are trying to make the airport as profitable as we can and everything we do is targeted towards that.

“But clearly we do have to take the ethics of the situation into account and take a decision that is right in the wider context.

“Any revenue is significant and so it was a decision that we didn’t take lightly.”

Bloomberg: Iran, second-largest oil producer in the Organization of...

To punish Iran, seize its embassy