Wall Street Journal: A Syrian government run by the country’s main opposition group would cut Damascus’s military relationship to Iran and end arms supplies to Middle East militant groups such as Hezbollah and Hamas, the group’s leader said, raising the prospect of a dramatic realignment of powers at region’s core.

By JAY SOLOMON and NOUR MALAS 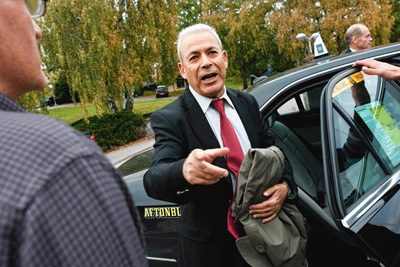 PARIS—A Syrian government run by the country’s main opposition group would cut Damascus’s military relationship to Iran and end arms supplies to Middle East militant groups such as Hezbollah and Hamas, the group’s leader said, raising the prospect of a dramatic realignment of powers at region’s core.

Burhan Ghalioun, the president of the Syrian National Council, said such moves would be part of a broader Syrian reorientation back into an alliance with the region’s major Arab powers. Mr. Ghalioun’s comments came Wednesday, in his first major media interview since he was made SNC leader in October.

Mr. Ghalioun also called on the international community to take aggressive new steps, including the possible establishment of a no-fly zone in Syria.

“Our main objective is finding mechanisms to protect civilians and stop the killing machine,” Mr. Ghalioun, a 66-year-old university professor, said from his home in south Paris. “We say it is imperative to use forceful measures to force the regime to respect human rights.”

Underscoring those concerns, the United Nations human-rights commission estimated Thursday that Syria’s crackdown on its nine-month uprising has claimed “much more” than 4,000 lives, a toll that has grown by the hundreds in recent weeks.

This year’s political uprisings in the Middle East increasingly have devolved into a power struggle pitting the U.S. and its Arab allies, such as Saudi Arabia, against Iran and its allies. Syria is viewed as the central prize, due to its strategic position and role in the Arab-Israeli struggle.

Syria would also appear ripe for realignment. President Bashar al-Assad’s government is Iran’s closest military and strategic ally in the region. Damascus and Tehran coordinate closely in funneling arms and funds to the Hezbollah movement that controls Lebanon and the militant group Hamas, which is fighting Israeli forces.

Mr. Assad and many of his top officials are Alawite, an offshoot of Shiite Islam. The regime’s alliance with Iran, which is Shiite-dominated and Persian, is seen as unnatural by Syria’s Sunni Arab majority; Mr. Ghalioun called it “abnormal.” The SNC, and Syria’s broader opposition, generally support dissolving the ties.

Such a position is welcomed by U.S. and European officials, who believe Mr. Assad’s overthrow could cripple Iran’s ability to project its power into the Palestinian territories and Egypt.

“There will be no special relationship with Iran,” Mr. Ghalioun said in the interview. “Breaking the exceptional relationship means breaking the strategic, military alliance,” he said, adding that “after the fall of the Syrian regime, [Hezbollah] won’t be the same.”

Mr. Assad, or members of his Alawite sect, could remain in power, of course. But should Damascus break from Tehran, diplomats believe, Iran’s own pro-democracy movement, snuffed out in 2009, could be reinvigorated. Efforts to contain the spread of sophisticated weapons systems could also be aided. Skepticism remains high, however, that such a development will help solve the Arab-Israel conflict, as new governments from Egypt to Tunisia appear just as committed to the Palestinian cause.

The Syrian National Council, formally established in October, serves as the face of Syria’s opposition to the international community and has proposed to lead a one-year transition to democratic rule. It is the broadest-based opposition coalition since protests broke out in Syria in mid-March, unifying Sunni Muslims, Christians, Kurds, youth committees and others.

But several Damascus-based political dissidents, and newer movements for political change, say the council was formed largely outside Syria and doesn’t adequately represent the spectrum of Syrian society. Factions within the SNC have differed over issues of regional autonomy, the question of foreign intervention in Syria’s crisis and the role of religion and Arab nationalism in any new state. The organization has also been hobbled by the lack of operating territory inside Syria and the cohesion of Mr. Assad’s military and government.

U.S. and European officials have voiced particular concern about the SNC’s lack of representation for women and religious minorities. They have also said that Sunni religious groups, such as the Muslim Brotherhood, could end up dominating the council.

“He’s doing an impressive job,” said a U.S. official. The officials added that momentum seems to be building behind the SNC, particularly after the Arab League nations voted overwhelmingly on Sunday to impose financial sanctions on the Assad government.

Mr. Ghalioun acknowledged in the interview that the SNC has faced challenges in uniting Syria’s opposition after more than 40 years of the Assad family’s dictatorial rule.

He said Syria’s Kurdish minority has 33 parties, making the choice of representation difficult. He said the SNC has also made a special outreach to Christians, including sending a mission to the Vatican, amid fears that Christians’ religious, economic and political rights could be curtailed in a post-Assad Syria.

Indeed, he said Syria, though roughly 70% Sunni Muslim, has a history of religious and ethnic diversity that would never allow it to be dominated by Islamist parties or Islamist law.

“I don’t think there’s a real fear in Syria of a monopoly of Islamists, not even 10%,” he said. “The Muslim Brotherhood has largely been in exile for 30 years and their internal coordination is non-existent.”

Mr. Ghalioun, too, has lived abroad for decades following the seizure of power by the Baath Party and a coup by Hafez al-Assad—Mr. Assad’s father—as president in 1970. Mr. Ghalioun has served as a political sociology professor at the Paris Sorbonne University, while intermittently returning to Syria to agitate for political reform. A self-declared secular Sunni, he has called for religion and state to be separate.

His role as opposition leader could end as early as this month under the committee’s bylaws, but discussions are under way to potentially extend his term.

In the interview, Mr. Ghalioun stressed that Syria will remain committed to reclaiming the Golan Heights territory from Israel, which Damascus lost during the 1967 Six Day War. But he said Syria would focus its interests through negotiations rather than armed conflict or the support of proxies.

He added that a new Syrian government would normalize relations with neighboring Lebanon after decades of dominating the country through its militarily and intelligence channels. A U.N. investigation has charged members of Hezbollah with assassinating former Lebanese Prime Minister Rafik Hariri in 2005, a charge the group has denied.

The SNC’s president joined the U.S. and European Union with charging Iran of assisting Mr. Assad in cracking down on the political rebellion. Tehran has repeatedly denied this charge. But Iranian officials, as well as Hezbollah, have been vocal in their support for the continuation of the Assad regime.

Mr. Ghalioun and the SNC have been conducting stepped-up negotiations with the Arab League, Turkey, Russia and European powers in recent days to find ways to protect Syrians and guarantee the supply of humanitarian aid, according to participants in the talks. The SNC president has met with French Foreign Minister Alain Juppé and U.K. Foreign Secretary William Hague.

Turkey, which on Wednesday joined the Arab League, U.S. and European Union in imposing financial sanctions on Mr. Assad’s government, has raised the possibility of establishing a buffer zone inside Syria to protect civilians from Mr. Assad’s forces. Mr. Juppé and the U.S. are pressing a plan to protect international monitors inside Syria.

The SNC’s chief visited the Turkish border this week to meet the commanders of the Free Syrian Army, which is made up of defectors from the mostly Sunni mid-ranks of the Syrian military. The FSA has claimed responsibility in recent weeks of at least one attack on a state security building. But Mr. Ghalioun said he had reached agreement with the FSA’s commanders that their military operations would focus solely on protecting Syrian civilians and not on offensive operations.

“We don’t want, after the fall of the regime in Syria, armed militias outside the control of the state,” Mr. Ghalioun said. “They assured us they will implement our agreement and abide by requests not to launch any offensive operations.”

Mr. Ghalioun echoed Western confidence that President Assad’s leadership is untenable in the long-term due to Damascus’s mounting financial woes and diplomatic isolation, saying Mr. Assad can survive only “months” more in office. U.S. and European officials believe it could take much longer.

The SNC believes Damascus’s foreign-exchange reserves are now below $10 billion, its leader says; Damascus officially cites between $17 billion and $18 billion. He also said that Syria’s economy will contract by at least 10% this year. Syrian economists say the government is projecting growth of around 4%.

“There isn’t even 1% chance that Assad will survive,” the SNC president said. “His only choice to carry on…is to continue the killing. They know that if they stop, they’re over.”

AFP: Britain is neither planning nor advocating military action...