AP: Iranian experts are in the final stages of recovering data from the U.S. surveillance drone captured by the country’s armed forces, state TV reported Monday. 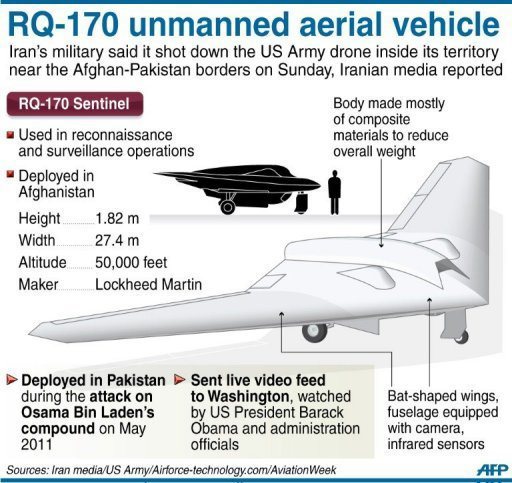 Tehran has flaunted the capture of the RQ-170 Sentinel, a top-secret aircraft with stealth technology, as a victory for Iran and a defeat for the United States in a complicated intelligence and technological battle.

President Barack Obama said Monday that the U.S. was pressing Iran to return the aircraft, which U.S. officials say malfunctioned and was not brought down by Iran. But a senior commander of Iran’s Revolutionary Guard said on Sunday that the country would not send it back, adding that “no one returns the symbol of aggression.”

Iranian lawmaker Parviz Sorouri, a member of the parliament’s national security and foreign policy committee, said Monday the extracted information will be used to file a lawsuit against the United States for what he called the “invasion” by the unmanned aircraft.

Sorouri also claimed that Iran has the capability to reproduce the drone through reverse engineering, but he did not elaborate.

State TV broadcast images Thursday of Iranian military officials inspecting what it identified as the drone. Iranian state media have said the unmanned spy aircraft was detected and brought down over the country’s east, near the border with Afghanistan.

Officers in the Revolutionary Guard, Iran’s most powerful military force, have claimed the country’s armed forces brought down the surveillance aircraft with an electronic ambush, causing minimum damage to the drone.

American officials have said that U.S. intelligence assessments indicate that Iran neither shot the drone down, nor used electronic or cybertechnology to force it from the sky. They contend the drone malfunctioned. The officials spoke anonymously in order to discuss the classified program.

U.S. officials are concerned others may be able to reverse engineer the chemical composition of the drone’s radar-deflecting paint or the aircraft’s sophisticated optics technology that allows operators to positively identify terror suspects from tens of thousands of feet in the air.

They are also worried adversaries may be able to hack into the drone’s database, although it is not clear whether any data could be recovered. Some surveillance technologies allow video to stream through to operators on the ground but do not store much collected data. If they do, it is encrypted.

Separately, in comments to the semi-official ISNA news agency, Sorouri said Iran would soon hold a navy drill to practice the closure of the strategic Strait of Hormuz at the mouth of the Persian Gulf, which is the passageway for about 40 percent of the world’s oil tanker traffic.

Despite Sorouri’s comments and past threats that Iran could seal off the waterway if the U.S. or Israel moved against Iranian nuclear facilities, no such exercise has been officially announced.

“Iran will make the world unsafe” if the world attacks Iran, Sorouri said.

Both the U.S. and Israel have not rule out military option against Iran’s controversial nuclear program, which the West suspects is aimed at making atomic weapons. Iran denies the charge, saying its nuclear activities are geared toward peaceful purposes like power generation.

In another sign of the increasing tensions between Iran and the U.S., Tehran said Monday it has asked Interpol to help seek the arrest of two former U.S. officials it accuses of supporting the assassinations of Iranian officials.

Ejehei said Iran sent a request to Interpol in Paris to help pursue the two Americans through its office in Washington.

Iran says the two men urged the Obama administration to use covert action against Iran and kill some of its top officials, including Brig. Gen. Ghassem Soleimani commander of the Quds Force, the special foreign operations unit of the Revolutionary Guard.

Iraq’s role in Syria war poses problems for US