Reuters: Treasury Secretary Timothy Geithner appealed for Chinese cooperation on nuclear non-proliferation on Wednesday in Beijing, as he sought Chinese help on the White House’s efforts to toughen sanctions on Iran. 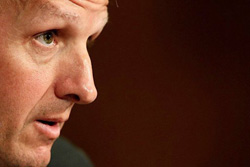 BEIJING (Reuters) – Treasury Secretary Timothy Geithner appealed for Chinese cooperation on nuclear non-proliferation on Wednesday in Beijing, as he sought Chinese help on the White House’s efforts to toughen sanctions on Iran.

Geithner meets with Chinese premier Wen Jiabao later on Wednesday, ahead of Wen’s trip next week to top oil supplier Saudi Arabia, whose additional output will be crucial if China is to replace crude it normally sources from Iran.

Geithner emphasized Sino-U.S. strategic as well as economic cooperation in a meeting on Wednesday with Xi Jinping, slated to become the next Chinese head of state.

“On economic growth, on financial stability around the world, on non-proliferation, we have what we view as a very strong cooperative relationship with your government and we are looking forward to building on that,” he told a smiling Xi.

Geithner is in Asia to garner support for tougher U.S. sanctions on revenues flowing to Tehran, which the U.S. accuses of attempting to develop nuclear weapons. Iran says its nuclear program is for civilian uses.

U.S. President Barack Obama authorized a law on New Year’s eve imposing sanctions on financial institutions that deal with Iran’s central bank, its main clearing house for oil export payments. The move will make it difficult for consumers to pay for Iranian oil.

China has backed U.N. Security Council resolutions calling on Iran to halt uranium enrichment activities, while working to ensure its energy ties are not threatened. As a permanent member of the council, China wields a veto.

But it has said the United States and European Union should not impose sanctions beyond the U.N. resolutions.

The European Union is already committed to a ban on Iranian crude, but the United States may face a tougher sell with China, Japan or India, the top three buyers of Iranian crude by country. Geithner heads to Tokyo after Beijing.

China, Iran’s largest oil customer taking around a fifth of its shipments, has already reduced crude purchases for January and February following a payments dispute.

Japan will consider cutting back its Iranian oil purchases to secure a waiver from new U.S. sanctions, a government source has said. Indeed, Japan has asked OPEC producers Saudi Arabia and the United Arab Emirates to supply it with more oil, Japanese Foreign Minister Koichiro Gemba said on Tuesday.

A boycott by other oil customers could potentially allow China to buy Iranian crude at a discount, thus reducing its payments to Tehran without forcing it to buy additional oil at a premium on world spot markets.

Geithner also emphasized his desire for increased U.S. exports to China as well as general growth in economic and trade ties in opening remarks attended by reporters.

The Obama administration is likely to put greater scrutiny on China’s compliance with market access commitments this spring, as Obama faces a tough re-election campaign and pressure from the left to make labor rights a larger part of his trade policy.

Khamenei Begs the UAE for Help