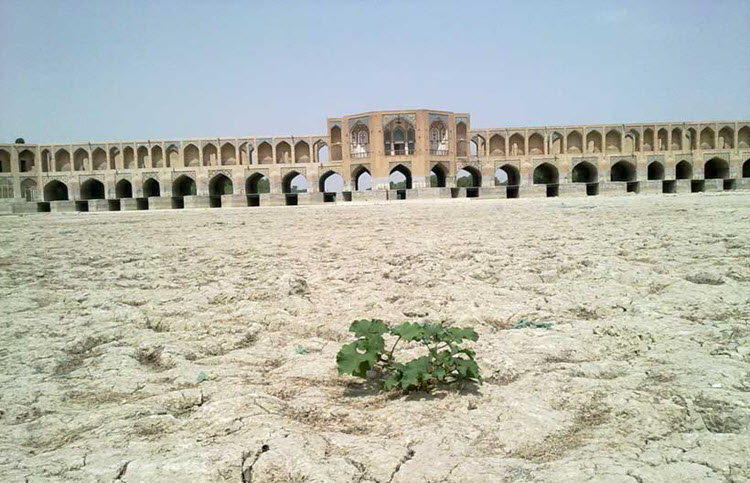 London, 09 Apr – Iranian farmers staged a protest at a major site in the capital city of Isfahan Province on Saturday, April 7, despite the suppressive security forces’ attempts to disperse them.

Some of these chants were: “Water of Zayandeh Rood is our absolute right”, “Farmers Moaning, Zayandeh Rood wailing” and “[Energy Minister] Ardakanian Yazdi! You’re water mafia!”

The frustrated farmers, who were thought to be a strong support group for the ruling mullahs, have been rising up recently over long-term restrictions to regional water sources, which is affecting their crops.

The farmers report that the local officials have long diverted water from Zayandeh Rood, the main river in Isfahan, to its neighbouring province, Yazd. This is either the result of mismanagement or corruption, according to the farmers.

The farmers’ protest movement gained widespread attention on March 18 when farmers from Varzaneh, Isfahan, invaded the Friday Prayer ceremony to turn their backs on the Prayer Leader, painting the clergy as the enemy and chanting “Turning away from the enemy, eying the motherland”.

The Rouhani administration and local authorities have repeatedly promised the farmers that they will be compensated because they are unable to irrigate their lands, but nothing has yet come forward.

The protests have repeatedly led to violent clashes between the farmers and the security forces, who will do anything to get the protesters to disperse.

Hassan Kamran-Dastjerdi, the MP for Isfahan, said that the energy ministry has “plundered” water from Varzaneh farmers by diverting it to steel mills, accused Energy Minister Reza Ardakanian of not implementing a water distribution law, and blamed the violence on the officials.

He said: “The security and intelligence forces shouldn’t investigate our farmers. The water rights are theirs.”

Mohsen Mehr Alizadeh, the Governor-General of Isfahan, has also warned that the province is facing an “intense” shortage of drinking water due in part to the lack of rain.

Iran’s Meteorological Organization reports that roughly 97% of the country is experiencing some degree of drought.

Hadi Ghaemi, the executive director of ney York-based advocacy group, the Center for Human Rights in Iran (CHRI), said: “Towns and villages around Isfahan have been hit so hard by drought and water diversion that they have emptied out and people who lived there have moved.”