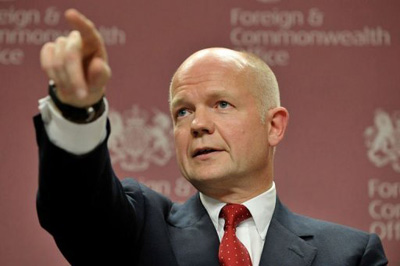 William Hague told Sky News television that he believed the European Union would agree tough new sanctions against Tehran’s oil sector later this month, and would continue to look for peaceful methods of persuading Iran to ditch its pursuit of a nuclear weapon.

Iran insists its nuclear program is intended solely for peaceful purposes, but the West and others accuse it of attempting to build a bomb. Britain’s defense secretary Philip Hammond said earlier this month that Tehran was working “flat out” on its weapons program.

“We have never ruled anything out. We have not ruled out any option, or supporting any option. We believe all options should be on the table, that is part of the pressure on Iran, but we are clearly not calling for or advocating military action,” Hague said.

“We are advocating meaningful negotiations, if Iran will enter into them, and the increasing pressure of sanctions to try to get some flexibility from Iran,” he said.

European officials have worked for several months on banning the purchase of Iranian oil — hoping to choke off funding for the nuclear program.

“I am confident we will adopt very significant additional measures …. covering the oil sector and possibly other sectors as well,” Hague said.

Britain has already downgraded ties with Iran following a major attack on its embassy in Tehran in November, which it insists was sanctioned by the country’s ruling elite. In response, Britain pulled all of its diplomats out of Iran and expelled Iranian diplomats from U.K. soil.

Reuters: The dispute over Iran's nuclear program moved to...

AFP: Iran called on the United States on Saturday...