Iran: The 1988 massacre was the single-worst execution of political prisoners since WW2 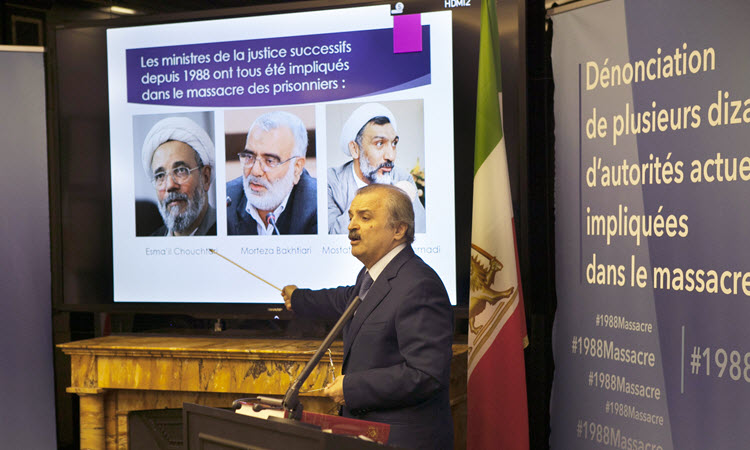 London, 7 September – The names of 59 senior figures in Iran who played a role in the 1988 massacre, were released this week by the Iranian resistance.

The People’s Mojahedin Organization of Iran (PMOI/MEK) have been investigating the people who were involved in the crimes and uncovered almost 60 people who are still in the government today.

The massacre was the single-worst execution of political prisoners since WW2, resulting in the death of 30,000 regime opponents, mainly members of the PMOI.

Their deaths were ordered by former Supreme Leader Ayatollah Khomeini; their bodies were buried in mass graves to avoid their resting place becoming a shrine.

This revelation follows calls from human rights organisations and politicians to call upon the international community to prosecute the murderers.
The National Council of Resistance of Iran (NCRI) held a press conference, on September 6, to read out the names of those involved.

Mohammad Mohaddessin, chair of the foreign affairs committee of the NCRI, said: “[The UN must] take the necessary steps to bring the perpetrators of this great crime to justice… The impunity must end. Inaction in the face of this crime has not only led to further executions in Iran but has also encouraged the regime to spread its crimes to Syria, Iraq and other countries of the region.

He mentioned that nearly 3,000 executions have occurred during the ‘moderate’ three-year reign of President Rouhani.

Maryam Rajavi, the leader of the NCRI, said: “Standing up to the violations of human rights in Iran is also the responsibility of Western governments because the consequences of this regime are not confined to Iran…The terrorism and fundamentalism emanating from Tehran have victimised defenceless people in Nice, Paris, Brussels, etc. Make your relations with the Iranian regime contingent on an end to executions in Iran. Put (Supreme leader) Khamenei and his accomplices on trial in an international court for crimes against humanity, specifically in 1988. And respect the Iranian people’s resistance for regime change.”