AFP: EU nations Thursday agreed to sanction Iran’s central bank, freezing assets used to finance its nuclear drive, but have yet to clinch an oil embargo deal that could penalise debt-hit Greece. 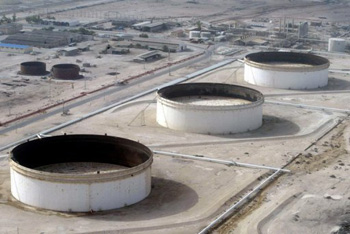 BRUSSELS (AFP) — EU nations Thursday agreed to sanction Iran’s central bank, freezing assets used to finance its nuclear drive, but have yet to clinch an oil embargo deal that could penalise debt-hit Greece.

“The text was considered closed and agreed,” a diplomatic source said of the proposed financial sanctions, following talks between senior diplomats from the 27 European Union nations.

Diplomats have held lengthy meetings through the week in Brussels to agree an oil and financial embargo against Tehran that is to be formally adopted at talks between EU foreign ministers on Monday.

But Greek concerns held up a final deal on the oil embargo.

The freeze on assets held by Tehran’s central bank will be partial, “enabling legitimate trade to go ahead”, and ensure there are no obstacles to continued payment of outstanding Iranian debts to Europe, an EU diplomat said.

Germany notably expressed concern over the reimbursement of loans to Iran worth 2.6 billion euros should financial channels be closed.

“The idea is to dry up sources of finance for Iran’s nuclear programme,” said the source, who spoke on condition of anonymity.

But the high-level diplomats planning ways of tightening the noose on Tehran were unable to finesse last details on an oil embargo, the source added.

“They’ll have another go on Monday morning” ahead of the foreign ministers’ meeting, said another diplomat.

“But it’s looking likely that the oil embargo will have to go directly to the foreign affairs council” of ministers, he added.

The new EU sanctions are part of a concerted effort with the United States to pressure Iran into halting its controversial nuclear activities, which the West suspects are aimed at developing nuclear weapons.

Iran says its nuclear programme is purely for civilian use.

The EU imported some 600,000 barrels of Iranian oil per day last year, according to the International Energy Agency, making it a key market alongside China, which has refused to bow to pressure from Washington, and India.

“The issue is how to reassure the delegation that depends most on Iranian oil that all is done to protect them,” said a diplomat.

“The problem with Greece was not resolved.”

Iranian oil accounted for 34.2 percent of Greece’s total oil imports, 14.9 percent of Spain’s and 12.4 percent of Italy’s in the first nine months of last year, according to the latest EU statistics.

The problem for European governments has been to agree to implement an embargo that gives nations dependent on deliveries from Tehran time to phase out existing contracts.

Some countries, including Britain, France and Germany, wanted a three-month deadline, whereas financially-stressed nations such as Greece, Italy and Spain were requesting up to a year.

Under discussion too has been a request from Italy to allow Iranian companies to continue repaying debts with crude instead of cash.

That would mean Tehran having less crude to sell on the market.

Contacts had been made “notably with Saudi Arabia to examine whether it could increase production to offset the loss of Iranian crude,” a senior EU official said.

Saudi Oil Minister Ali al-Naimi said this week that the kingdom’s output could be boosted by around 2.6 million barrels a day to offset a potential cut in Iranian exports.

But Iran warned Saudi Arabia to reconsider its vow to make up for any shortfall.

AFP: Iran on Monday criticised Hollywood for awarding its...

Reuters: Japanese police have arrested two men and a...