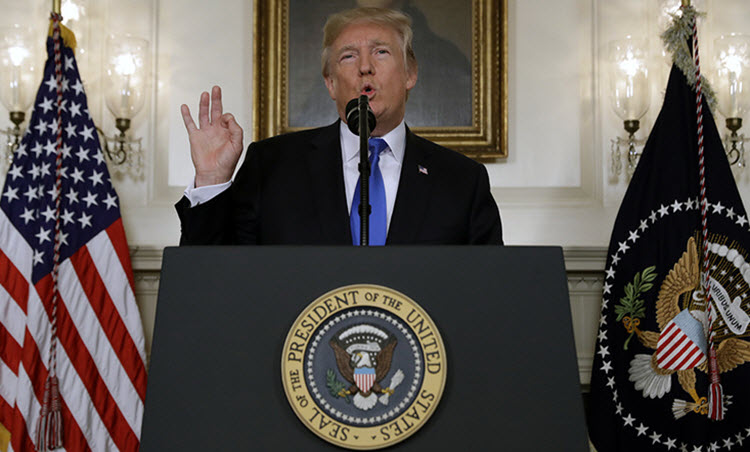 London, 18 Jan – Even if the Iranian Regime was correct in its assessment that the popular people’s protest was waning, the US’s reaction is just getting started.

Last Friday, Donald Trump decided to continue to waive broad sanctions on the Iranian Regime until May, when he would pull the US out of the 2015 nuclear deal if improvements could not be made.

However, just to make it clear that he wasn’t playing softball with the Regime at a time when its own people were taking to the streets to call for the heads of their rulers, Trump also issued new targeted human rights sanctions against key people and institutions in Iran.

This included Iran’s Judiciary Chief Sadegh Amoli Larijani, who is responsible for the brutal crackdown on protesters that had left at least 50 dead and over 8,000 facing the death penalty, as well as groups like the Supreme Council of Cyberspace, responsible for cyber attacks on dissidents and internet censorship, and the Islamic Revolutionary Guard Corps (IRGC) for its continued violence against the Iranian people.

There are three main reasons why these sanctions are of note.

1) Fulfilled promise: Trump warned the Regime that there would be consequences if they tried to suppress the demonstrators and these sanctions show the penalty for repression.

3) A new focus on human rights: The American voters largely approve of the US giving verbal support to the Iranian people’s right to protest peacefully and imposing human-rights related sanctions on the mullahs, according to a study by McLaughlin & Associates. This is true not only in every part of the country but also across party lines.

Ilan Berman, the senior vice president of the American Foreign Policy Council in Washington, wrote on US News: “In the wake of the recent protests in Iran, the Trump administration appears to have grasped the fact that, ultimately, the future of the country will be decided on the streets of Tehran and other Iranian cities. It also seems to have understood that, when it comes to Iran’s future, perhaps the most important role the United States can play is to stop the Iranian regime from preventing such forces from coalescing.”

Reuters: Iran said on Wednesday it would keep improving...