Reuters: After a year of sanctions and sabre-rattling over Iran’s nuclear programme, negotiators from Tehran and six world powers finally resumed talks and found at least enough common ground to agree to meet again next month.

By Fredrik Dahl and Justyna Pawlak 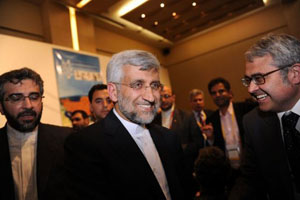 ISTANBUL (Reuters) – After a year of sanctions and sabre-rattling over Iran’s nuclear programme, negotiators from Tehran and six world powers finally resumed talks and found at least enough common ground to agree to meet again next month.

With threats of war hanging over an already unsettled Middle East, U.S. and other Western diplomats welcomed an Iranian willingness in Istanbul on Saturday to discuss their nuclear activities – something they had refused since early last year.

But though they will meet again, in Baghdad on May 23, they remained poles apart. Iran called for a lifting of sanctions and recognition its uranium enrichment is for purely peaceful ends; the United States demanded urgent action to prove the Islamic Republic is not seeking the potential nuclear arsenal which Washington and ally Israel threaten to eliminate by force.

“While the atmosphere today was positive and good enough to merit a second round, we continue to stress … that there is urgency for concrete progress and that the window for a diplomatic resolution is closing,” said a senior U.S. official.

Over the past year, Israeli talk of “pre-emptive” strikes if Iran does not stop working on some aspects of nuclear technology have stoked fears of war – and lifted oil prices – especially since estimates of how much longer Tehran might need to build an atomic device, should it wish, have shortened to a year or two.

A resumption of dialogue may help dampen anxieties, although hawkish voices in Israel and Western states have long questioned Tehran’s good faith and accuse it of using talks to buy time for its nuclear scientists – some of whom have been killed in what Iran says is a covert campaign by Israeli and Western agencies.

Publicly, negotiators on all sides emphasized the positive.

“We expect that subsequent meetings will lead to concrete steps towards a comprehensive negotiated solution which restores international confidence in the exclusively peaceful nature of the Iranian nuclear programme,” said Catherine Ashton, the EU foreign policy chief who leads negotiations for the six powers.

The group comprises the five permanent members of the U.N. Security Council – Russia, the United States, China, France and Britain – along with Germany. It is known as the P5+1.

Calling Saturday’s talks “constructive and useful”, Ashton said: “We want now to move to a sustained process of dialogue.”

For the White House, deputy national security adviser Ben Rhodes called the talks “a positive first step”. “The Iranians came to the table and engaged in a discussion about their nuclear programme,” he said. Meeting again was also “positive”.

The meeting in Baghdad, a rare friendly venue for Iranians in the Arab world, would be part of a “step-by-step” approach.

Junior officials would meet again before May 23, she said.

One senior diplomat present in Istanbul said agreeing to Iran’s request for a meeting in troubled Iraq showed commitment by the negotiators – “Baghdad was a test. They are saying: ‘If you really want to talk to us, then come and talk to us’.”

Sidestepping questions of how long talks could continue before impatient Western powers, or Israel, might cut them short by force, the envoy said: “I would much rather spend a long day in Istanbul than be picking up the pieces at the end of a war.”

Chief Iranian negotiator Saeed Jalili made clear that Iran had no intention of accepting a key demand, that it halt plants which enrich uranium to 20 percent fissile material – far beyond the quality needed to generate the electricity which it says the oil-rich country requires to develop economic prosperity.

Nonetheless, however remote a final accord may be between the Islamic Republic and its adversaries, a return to the negotiating table may calm nerves after 15 angry months.

In that time, the West has imposed new crippling economic sanctions while Iran, watching its key regional ally Syria collapse into internal strife, has threatened to blockade oil tankers. Israel, fearful a nuclear Iran would jeopardize its very survival, has been planning possible “pre-emptive” strikes.

“If, in the past, the Iranians used the talks as a kind of honey trap in order to continue their enrichment and activity while the talks are under way and to prevent sanctions, this time they’re facing a dilemma,” he told Israel Radio on Sunday.

“The intention now is to continue to tighten sanctions and I estimate that in the coming weeks or months we will know if they are working or not. Only a complete cessation of activity will result in a victory or a positive outcome for the sanctions.”

One diplomat from the six said Iran’s willingness to at least talk marked a shift away from the stalemate at meetings early last year. Before, when Westerners accused Tehran of secret weapons activities, “they would have walked away”, the envoy said, adding that delegates were not “overly optimistic” but that there was a “seriousness to discuss the nuclear issue”.

Yet few expect a rapid change of heart in Tehran, even if the weight of new sanctions, notably financial measures by U.S. President Barack Obama and a European Union oil import ban, have made many Iranians keenly aware of the cost of that policy.

Its defiant defense of a right to nuclear energy has proven one of the more popular policies for Iran’s clerical leaders at a time when dissatisfaction is growing among the population over economic hardships – aggravated by sanctions – and a lack of the political freedoms being claimed elsewhere in the region.

“We witnessed progress. There were differences of opinion,” Jalili said. “But the points we agreed on were important.”

Asking for negotiations to include the lifting of sanctions, he said: “The next talks should be based on confidence-building measures which would build the confidence of Iranians.”

His defense of 20-percent enrichment did not impress the United States or others who question the justification and say that that level of enrichment makes a “break out” to weapons-grade material – around 90 percent – much easier.

Jalili spoke under a banner showing a map of the region and reading “Nuclear Energy for All. Nuclear Weapons for None”, a reference to Iran’s complaints that its Israeli foe is widely assumed to have the only nuclear arsenal in the Middle East.

While there was little new heard in Istanbul on the substance of the disputes, the resumption of a process, which its adversaries hope might let Iran’s leaders perform a face-saving climbdown and also may stay Israel’s hand, was seen by observers as favoring the chances of a peaceful outcome.

The talks “established a positive foundation for progress on the nuclear question. The talks exceeded initial expectations”, said Daryl Kimball of the Arms Control Association, a Washington-based research and advocacy group.

“The further high-level and technical talks announced today are the logical next step to reach agreement on specific, concrete steps that can help prevent a nuclear-armed Iran.”

Nonetheless, the senior U.S. official in Istanbul said Washington would maintain financial sanctions aimed at crippling Iran’s oil trade and expected the EU oil embargo to take effect on July 1: “Dialogue is not sufficient for any sanctions relief.

“I don’t want to raise anybody’s expectations that all of a sudden large steps will get taken … We haven’t talked to the Iranians for 15 months … We have not seen them address the concerns of the international community. We have seen instead them proceed forward with their nuclear programme in ways that increase the concern of the international community.

“There is no reason to believe yet that we will make all of the progress that we want to make.”

In a damning report on October 4, the semi-official...

Iran says can hit Israel with missiles if attacked

Reuters: Iran could hit back at Israel with missiles...