Iran has nowhere to hide in Baghdad talks: analysts

AFP: Iran’s agreement in talks Saturday with world powers for a more in-depth meeting in Baghdad on May 23 is the tiniest of steps in what will be a long and difficult road to restoring trust, analysts said.
By Simon Sturdee 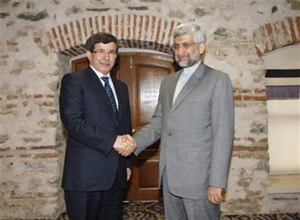 ISTANBUL (AFP)— Iran’s agreement in talks Saturday with world powers for a more in-depth meeting in Baghdad on May 23 is the tiniest of steps in what will be a long and difficult road to restoring trust, analysts said.

“It’s too early to say whether or not we’ve turned a corner,” Peter Crail, analyst at the Arms Control Association think-tank in Washington, told AFP.

“An agreement to begin a negotiations process that can dig deeper into these high-stakes and highly technical issues was as good as we could have expected. There’s still much work to be done,” he said.

What happened here on Saturday “cannot be called a breakthrough. If there is a breakthrough, it would come at the next meeting,” agreed Bruno Tertrais, senior research fellow at the Foundation for Strategic Research (FRS) in Paris.

“It is only when both sides have agreed on the next steps … and when whatever Iran will agree to can be verified, that we will be able to say for certain that something real has happened. Until then it’s only talk,” he said.

In particular, Iran will have no option, if it is to relieve some of the current international pressure, than to commit to what EU foreign policy chief Catherine Ashton and the White House late Saturday called “concrete steps”.

This is likely to include most notably scaling back the enrichment of uranium to purities of 20 percent, which Tehran says is to produce medical isotopes but which, if processed further, can also be used in a nuclear weapon.

This more than anything has sparked fears in the international community, not least in Israel, that the real purpose of Iran’s nuclear activities is to get the bomb, a charge the Islamic regime angrily denies.

Iran did little to soothe such such concerns in January when the UN nuclear watchdog said Tehran had begun to enrich at the Fordo site, deep inside a virtually impregnable mountain bunker near the holy city of Qom.

Iran might also be able to reconfigure its centrifuges at the site to enrich uranium to weapons-grade levels of 90 percent if it decided to go for broke and make nuclear weapons, experts say.

Western powers will in Baghdad also press Iran to grant the International Atomic Energy Agency (IAEA) access to sites that at present are off-limits and help soothe fears that Tehran has other covert sites, as Fordo was until 2009.

To allow this Iran would need to implement the so-called “additional protocol” of the nuclear non-proliferation treaty that Iran, as a NPT signatory, briefly adhered to but dropped in 2006, analysts said.

The IAEA itself regularly says in its quarterly reports that since Iran is “not providing the necessary cooperation” it is “unable to provide credible assurances about the absence of undeclared nuclear material and activities.”

Another way to relieve pressure could be the revival of previous attempts at a deal whereby other countries supply nuclear fuel in return for Iran sending some of its uranium stockpiles abroad.

But Iran is unlikely to give any ground, analyst say, without some sort of commitment that in return, the UN Security Council and Western countries will ease some of the sanctions piled on Tehran in recent years.

This though is far from certain, Tertrais at the FRS told AFP.

“Assuming mutual steps can be agreed upon, there is a whole de-esclation process which is conceivable,” he said.

But he added: “I cannot imagine that the P5+1 would agree to the second and third steps without some real demonstrable and verified steps by Iran.”

Mark Hibbs, analyst at the Carnegie Endowment for International Peace, told AFP that “getting Iran and the US to directly engage bilaterally would give this process a shot in the arm, provided there is political will on both sides.”

But in a reminder of Tehran’s enmity towards Washington, a source close to Iran’s delegation said they had spurned a request from their US counterparts for what would have been a rare bilateral meeting on the sidelines in Istanbul.

“Israel is in the background which both in Iran and in the P5+1 has focused people’s minds. They know there is not a lot of time,” Hibbs said.

New York Times: The Israeli onslaught in Lebanon and...