Reuters: Overcrowded hospitals in northwest Iran struggled to cope on Monday with thousands injured by a pair of powerful earthquakes that killed nearly 300 people and wrecked scores of villages. 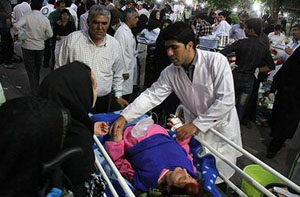 DUBAI, Aug 13 (Reuters) – Overcrowded hospitals in northwest Iran struggled to cope on Monday with thousands injured by a pair of powerful earthquakes that killed nearly 300 people and wrecked scores of villages.

Thousands huddled in makeshift camps or slept in parks after Saturday’s quakes for fear of more aftershocks, 60 of which had already struck. A lack of tents and other supplies left them exposed to the night chill, one witness told Reuters.

Doctors in the provincial capital Tabriz, the city of Ardabil and other towns worked flat out and roads to the cities were clogged with traffic as relatives ferried the injured from the outlying villages which were worst affected by the twin quakes. Long queues formed at the hospitals.

“From last night until this afternoon when I left Shohada-ye Tabriz hospital, doctors were constantly performing operations. It was a horrific tragedy but people and officials did all they could,” a doctor working in Tabriz said by telephone.

“Ordinary people were working alongside rescuers. They were bringing food and water to the hospital. Some were using their cars to bring the relatives of those injured to the hospital.”

The worst damage and most casualties appeared to have been in villages around the towns of Ahar, Varzaghan and Harees, near Tabriz, Iranian media said.

Tabriz resident Ahmad, 41, told Reuters his cousin living in a village near Ahar had been killed.

“Nobody knows what happened to his wife and two daughters,” aged 4 and 7, Ahmad said. “We fear that if rescuers don’t get to them soon, they will lose their lives too if they’re still alive … People in those villages need help.”

Supreme Leader Ayatollah Ali Khamenei urged officials on Sunday night to help those affected by the earthquakes which the U.S. Geological Survey said measured 6.4 and 6.3 magnitude and struck 11 minutes apart, northeast of Tabriz.

The city is an important trading hub far from Iran’s oil-producing areas and known nuclear facilities. Buildings inside Tabriz are substantially built and there were no injuries there.

But homes in the villages are often made of concrete blocks or mud brick that can crumble and collapse in a strong quake.

More than 1,000 villages in the area were affected by the earthquakes, Ahmad Reza Shaji’i, a Red Crescent official, told the Iranian Students’ News Agency (ISNA). Some 130 villages suffered more than 70 percent damage, and 20 villages were completely destroyed, he said.

Abbas Falahi, member of parliament for Ahar and Harees, said people in some villages were still “in dire need of food and drinking water”, the semi-official Mehr news agency reported.

“Despite the promises of officials, little first aid has been distributed in the region and most people are left without tents. If the situation continues, the toll will rise,” he said.

“We saw some villages that were truly destroyed,” said Tahir Sadati, a photographer covering the quake aftermath. “One good thing was that the earthquake happened during the day, so many people were not in their homes. If it had happened at night the casualties would have been far worse.”

“We have now finished search and rescue operations and we are working to provide shelter and food to the survivors,” Interior Minister Moustafa Mohammad-Najjar told state television. He said the death toll stood at 227 although other officials have given higher numbers.

Nearly 100 ambulances and 1,100 Red Crescent workers were deployed, Shaji’i said, along with 44,000 food packages and 5,600 tents for shelter. The relief agency had enough supplies and most residents in the area had access to clean water but Shaji’i asked residents to donate cash to the relief effort.

About 36,000 people in the quake-hit area have been given emergency shelter, Masoumi was quoted as saying by ISNA.

The United States, Russia, Turkey and a host of other nations offered their condolences and said they were ready to offer assistance, but Iran did not make any call for international help.

Iran is crisscrossed by major fault lines and has suffered several devastating earthquakes in recent years, including a 6.6 magnitude quake in 2003 that reduced the historic southeastern city of Bam to dust and killed about 31,000 people.

Saturday’s quakes struck in East Azerbaijan province, a mountainous region populated mainly by Azeri Turks that neighbours Azerbaijan and Armenia to the north.