AP: For weeks, a manifesto complaining about Iran’s stumbling economy circulated in secret among factories and workshops. Organizers asked for signatures and the pages began to fill up. By Associated Press 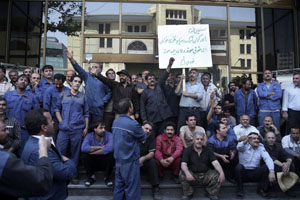 TEHRAN, Iran — For weeks, a manifesto complaining about Iran’s stumbling economy circulated in secret among factories and workshops. Organizers asked for signatures and the pages began to fill up.

In the end, some 10,000 names were attached to the petition addressed to Iran’s labor minister in one of the most wide-reaching public outcries over the state of the country’s economy, which has received a double pounding from tightening Western sanctions and alleged mismanagement by President Mahmoud Ahmadinejad’s government.

The rare protest document — described to The Associated Press this week by labor activists and others — suggests growing anxiety among Iran’s vast and potentially powerful working class as the ruling system struggles with the latest sanctions, which have targeted critical oil exports and blackballed Iran from international banking networks.

It also appears to reinforce the U.S. and European assertions that the economic squeeze is bringing increasing pressures on Iranian authorities. President Barack Obama and others argue that sanctions and diplomacy are the best way to wring concessions over Iran’s nuclear program even as Israeli Prime Minister Benjamin Netanyahu pushes for a “red line” declaration that could trigger military action.

While Iran’s leadership still has broad-based public support in the nuclear standoff with the West, the petition and sporadic street demonstrations over the slumping economy suggest a growing distinction between the national pride of nuclear technology and the economic hardships from Tehran’s defiance. The Iranian currency, the rial, hit another all-time low against the dollar Monday, which is certain to further drive up prices of imported goods.

Jafar Azimzadeh, a labor rights activist and gas-pipe fitter, warned of stronger fallout if the government does not find ways to prop up salaries and rein in prices. “Workers would not stay at the level of writing petitions,” he said. “They would go toward street gatherings and other actions.”

U.S. State Department spokeswoman Victoria Nuland said the drop in the value of the rial “speaks to the unrelenting and increasingly successful international pressure that we are all bringing to bear on the Iranian economy. It’s under incredible strain.”

Iranian officials have repeatedly said Iran can ride out the sanctions through measures such as keeping oil flowing to Asian markets that include China and India. But Ahmadinejad last month acknowledged that Iran faces “barriers” to sell oil and make international banking transfers critical to keep commerce flowing.

In May, Ahmadinejad was cheered in the northeastern city of Mashhad as he promised to create 2.5 million new jobs and boost worker benefits. It was a welcome reception after facing mounting criticism for policies that include scattershot privatizations and allowing inflation to surge.

But the petition sent to his labor minister, Abdolreza Sheikholeslami, offered a far more bleak assessment of a country burdened by rising prices and increasing economic isolation.

Reuters: Egypt has detained an Iranian diplomat who worked...