Reuters: The eight Indian crew members on board the MV Amina had no inkling they were trapped on the frontline of the West’s economic war against Iran. By Anupama Chandrasekaran 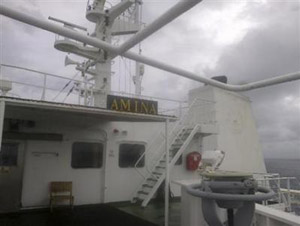 CHENNAI, India (Reuters) – The eight Indian crew members on board the MV Amina had no inkling they were trapped on the frontline of the West’s economic war against Iran.

All experienced seamen, they joined the Iranian-flagged cargo ship last year. Within months, they were caught up in a fight to prevent the ship fleeing to international waters to escape port arrest in Sri Lanka. Having disobeyed the captain’s orders to weigh anchor, their courage turned to fear.

“The captain taunted us that if you fall in the water I will give a report that says that you tried to commit suicide,” said 42-year-old Jesuraj, a foreman of the ship, speaking to Reuters after he and the others eventually made their way home.

“We had a lifeboat on standby and were ready to escape if required. We slept with our life jackets with the hope that if the ship did leave for Iran we would jump off and try to get the attention of some fishing boat.”

For a few miserable weeks, this was life on the sharp edge of a sanctions regime that has battered the Iranian economy and squeezed the shipping fleet it relies on for commerce, cutting off funds that the West says could be ploughed into expensive nuclear arms programmes.

The Indians left the ship after authorities intervened, returned their confiscated passports and took them ashore in Sri Lanka.

Subsequently, the Amina was fired on by Sri Lanka’s navy when it tried to make another getaway. A few days later, the Iranian captain took advantage of rough seas to flee, bringing the ship into Iran’s Bandar Abbas port last week.

“We weren’t able to sleep at night,” said Harpreet Singh Sahota, 25, who worked as a helmsman on the Amina. “We felt paranoid and threatened all the time. We were desperate to get off the ship,” he said in an interview in the Indian city of Mumbai.

The Amina was one of four ships ordered taken over by Germany’s DVB Bank for defaulting on a loan, all of them dry bulk carriers mainly used for Iran’s food grain imports.

Two of the other ships ordered re-possessed by DVB are anchored off Iran, while the fourth has been held in the northern Chinese port of Qinhuangdao. It is unlikely any can sail in international waters in the near future without threat of arrest.

Revenues of IRISL and other Iranian ship operators are being squeezed by the effects of the sanctions, which include an EU ban on some maritime insurance; the exit from Iran of firms that certify ships, which is vital to ports; and the de-flagging of vessels from international registries.

All this was unknown at the time to the Indian crew members aboard the Amina, although they said salaries were always paid 2-3 months late. A crew of Filipinos who preceded the Indians had already had a standoff with the captain over wage payments.

The Indians said the food was also the worst they’d ever eaten aboard a ship, and there was not enough of it.

When anchored off Sri Lanka, meat and eggs were rationed out, said Anand Nalla, a 39-year-old engineer from India’s southern state of Andhra Pradesh.

“Even the Iranian crew didn’t like the food and they prayed that they reach Iran safely without dying of hunger along the way,” he said.

The eight Indians came aboard the ship at Luhua Shan, the Chinese island port near Shanghai, from early to late 2012, joining 16 Iranian crew members.

At first, everything seemed normal.

But the new crew came to learn that the ship had been waiting for months to get new cargo. Many foreign companies have severed ties to Iranian shipping, scared that they could lose contracts with American businesses if they help Tehran get around the sanctions.

The ship changed its name in October, when the ship was anchored at Luhua Shan. Jesuraj, who for this story only wanted to reveal his first name, was given the task of erasing the ship’s previous name, “MV Shere”, and painting over in yellow “MV Amina” on the black-and-red coloured ship.

IRISL has tried to dodge sanctions by changing its flags and setting up front companies, the U.S. Treasury and the EU have said.

Still unable to secure any cargo, the Amina’s owners ordered the captain to leave China and on November 18, it set sail for Iran via the Indian Ocean with its hold empty.

The ship stopped off the Sri Lankan coast in early December to wait for Iranian soldiers to join it from another cargo ship. The soldiers were needed to give protection to the vessel before it ventured into the Arabian sea, where Somali pirates lurk to capture cargo ships and hold crews hostage.

The ship waited for the soldiers 11.3 nautical miles off the port of Galle.

But on the morning of December 14, instead of a boat carrying Iranian soldiers, the crew members on duty spotted a large Sri Lankan navy ship speeding towards them. On it were officials of the Colombo High Court, who boarded the ship to announce its arrest and stuck two notices on the boat. They were acting on a court order obtained by DVB Bank for unpaid loans.

The Sri Lankan authorities confiscated the crewmen’s’ passports and service documents, a fact that, according to Sahota, the captain initially tried to conceal from the Indians.

That is when the Indians panicked. They were worried that the Iranians would attempt to break the arrest and escape home, and they were scared that, once in Iran, they could face arrest or worse for disobeying their captain’s orders.

One evening after the ship’s arrest, the captain asked the Iranian crew members to try the engine, a normal check ahead of setting sail, which unnerved the Indians.

Ignoring the Indians’ protests, the captain then gave orders to weigh anchor. But the eight Indians rushed to prevent the 16 Iranians from doing so and threatened to drop the second anchor if the captain tried to move into international waters.

Soon after the ship was arrested, Jesuraj’s blood pressure started rising and he developed chest pains. But the captain refused to let him go ashore to get medical help, he said.

Amid simmering tensions, the Indians made frantic calls from their mobile phones to friends and relatives, asking them to get the Indian government to intervene.

“It was like hell and we were tense all the time,” said Nalla, who said he always moved around the ship with two fellow Indian sailors for protection.

Eventually, after the Times of India newspaper and TV news channels aired their phone conversations pleading for help, the Indian embassy in Sri Lanka contacted them. Their passports were released, and pressure was put on the captain to let them go.

Not long after they had left, the Sri Lankan navy fired warning shots to prevent the Amina from leaving, but a week later the Iranians tried again and the ship headed out to sea.

The Amina subsequently vanished from tracking systems off India’s southwest coast. But then, last Friday, tracking data showed that it had arrived back in Bandar Abbas, dropping anchor near two of the other ships that DVB Bank has tried to seize.

Iran has become the center of inquiry, where it...