Huffington Post: The Iranian opposition satellite television, Simaye Azadi or Iran National Television (INTV) held a telethon program. Viewers were urged to call and send contributions so the channel could maintain its activities. 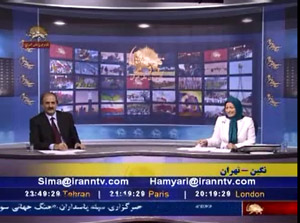 Over the weekend, the Iranian opposition satellite television, Simaye Azadi or Iran National Television (INTV) held a telethon program. It was initially scheduled for Saturday and Sunday (26-27 January). Viewers were urged to call and send contributions so the channel could maintain its activities.

A non-profit station banned in Iran, INTV broadcasts news and information to Iranians all around the world via satellite and internet. The deputy chief of Iranian regime’s TV Broadcast cooperation back in 2010 admitted that despite the ban, 40 per cent of Iranian homes have access to satellite TV. Due to increased internet censorship and control which has led to the tracking down and arrest of many online-activists inside Iran, many have turned to this network as a way to obtain real information without being traced.

As the channel is commercial-free and run by volunteers, fundraising has become an indispensable part of its activities. For those in Iran, giving it any support could have severe consequences. Mr Gholamreza Khosravi, 47, imprisoned since 2010, has received a death sentence for giving a small donation to INTV which openly backs the main opposition movement PMOI or MEK.

This weekend’s telethon was met with an unprecedented enthusiasm. Callers phoned from Europe, US, Australia, Canada… but most importantly from Iran. The number of Iranians who called from many cities across Iran and pledged to donate was so impressive that the producers decided to extend the program to some more days. Twenty-two phone lines were set up to respond to viewers. Even a dozen members of parliaments in Europe called to encourage people to donate. Contributions ranged from as small as five Euros up to 400.000 Dollars. The final figure was announced on Wednesday’s prime time 18.00 news: $4.137m (£2.6million). This was greater than any amount that similar campaigns had raised previously.

UPI: The charismatic leader of the Iranian opposition, the...