Reuters: The United States plans to open a “virtual embassy” for Iran that will give Iranians online information about visas and student exchange programs despite the lack of formal diplomatic ties, Secretary of State Hillary Clinton said on Wednesday. 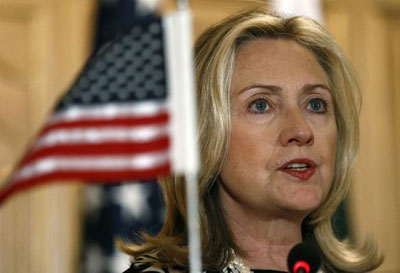 WASHINGTON (Reuters) – The United States plans to open a “virtual embassy” for Iran that will give Iranians online information about visas and student exchange programs despite the lack of formal diplomatic ties, Secretary of State Hillary Clinton said on Wednesday.

Clinton, in interviews with the Persian language services of the BBC and Voice of America, defended U.S. sanctions against Iran and said Washington had a strong criminal case linking Tehran to a plot to assassinate the Saudi ambassador in Washington.

Clinton used both interviews to stress that the United States hoped to broaden contacts with regular Iranians despite tensions with the Tehran government, which she said was being transformed into a military dictatorship.

“My goal in speaking to you today is to clearly communicate to the people of Iran, particularly the very large population of young people, that the United States has no argument with you. We want to support your aspirations.

“We would be thrilled if tomorrow the regime in Iran had a change of mind,” she told the Voice of America.

Clinton said the “virtual embassy” web site would be open by the end of the year and it would provide Iranians with information on visas and other programs.

The United States broke formal diplomatic relations with Tehran in 1980 following the Iran hostage crisis, and ties have remained tense amid disputes over Iran’s nuclear program and U.S. charges that Iran is the most active state sponsor of terrorism around the world.

In his waning months in office, President George W. Bush weighed opening a U.S. Interests Section, which could issue visas, in Tehran, but ultimately decided against it.

Clinton said the United States was providing both technology and training to help Iranians circumvent government limits on the Internet and other forms of communication while seeking to expand sanctions on Tehran.

She acknowledged economic sanctions sometimes caused difficulties for average Iranians, but said they were the best tool to pressure Iran’s leaders.

“We see disturbing trends and actions having to do with the continuing covert effort to build a nuclear weapons program … with a lot of deception, a lot of lying to the International Atomic Energy Agency and the rest of the international community,” Clinton told the BBC.

“We see aggressive behavior toward neighbors in the region, we see efforts to try to hijack and undermine the so-called Arab Spring awakening,” She said. “We do not want a conflict with Iran but we do want to see the rulers of Iran change their outlook and their behavior.”

Clinton said the door remained opened to talks with Tehran on its nuclear program, although she suggested the outlook was complicated by political divisions within the Iranian government itself.

“I believe there’s a power struggle going on inside the regime and they can’t sort out what they really are willing to do until they sort out who’s going to do what,” she said.

Clinton said she was aware that many people around the world were skeptical about U.S. charges this month that Iran was tied to a plot to kill the Saudi ambassador, but said she believed Washington had a strong case.

“I taught criminal law some years ago. It’s a very strong case. It certainly raises the right questions and I think it will be a successful case,” she told the BBC.

Iran has rejected the U.S. accusation as a fabrication designed to sow discord in the oil-rich Gulf.

Clinton said details of the case, in which two Iranians with security links are accused of seeking to kill the Saudi ambassador with help from members of a Mexican drug cartel, reflected a broader pattern of dangerous behavior by the Quds Force, the covert operations arm of Iran’s powerful Islamic Revolutionary Guards Corps.

“I understand people questioning it because it was such a shocking plot. It was shocking to us when we uncovered it,” Clinton told Voice of America.

“They’ve gotten more reckless,” Clinton told the BBC, saying the alleged plot was an attempt by the Quds Force “to thumb their nose at the Americans.”

AFP: US President Barack Obama on Sunday denounced the...