AFP: A team of US Congressmen met with the Iranian dissident group MEK in Paris on Sunday and threatened to declare Iraq’s prime minister a sponsor of terrorism after a deadly attack on an Iranian exile camp there. 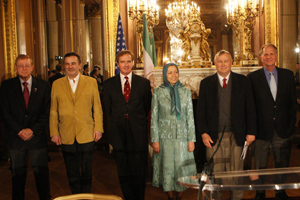 PARIS (AFP) — A team of US Congressmen met with the Iranian dissident group MEK in Paris on Sunday and threatened to declare Iraq’s prime minister a sponsor of terrorism after a deadly attack on an Iranian exile camp there.

The bi-partisan team, led by Dana Rohrabacher — the chair of the sub-committee on Europe — expressed strong support for the People’s Mujahedeen of Iran (MEK) which has accused Iran’s supreme leader Ayatollah Ali Khamenei of ordering a deadly attack on its camp in Iraq on February 9.

“The government of Iraq has clearly broken its word to us,” Rohrabacher said, recalling that seven people died and several were injured in the assault on Camp Liberty, a former US military base near Baghdad housing about 3,100 members of the MEK.

“The Iranian government and the Iraqi government are working together to murder opponents of the mullah regime,” he said, calling for their immediate transfer to Camp Ashraf, a former refugee camp in Iraq’s Diyala province.

“If there is another attack on these helpless refugees obviously cleared by the government of Iraq, we will move in the US Congress … and put forward a resolution declaring Prime Minister Maliki and his government state sponsors of terrorism.

“It’s a terrorist attack when you kill unarmed civilians,” he said, adding that if this were allowed to continue “the mullah dictatorship in Iran will see that as a sign of weakness and all of us will suffer.”

A US statement at the end of the talks called for the immediate removal of the residents of Camp Liberty to Camp Ashraf to “move them out of harm’s way.”

MEK leader Maryam Rajavi has denounced what she called the “crimes of the Iranian state” and stressed that Camp Liberty was inside a giant military zone and that the perpetrators could only have got inside with help from “within the Iraqi government”.

The four-member US delegation held talks with Rajavi and said the MEK was the “legitimate alternative to the ruling dictatorship” in Tehran in a strong show of support for a group that was struck off the US terror list only in September.

The Paris-based body had invested much money and years of intense lobbying to be taken off the list.

The left-wing group was founded in the 1960s to oppose the shah of Iran, and after the 1979 Islamic revolution that ousted him it took up arms against Iran’s clerical rulers.

The MEK says it has now laid down its arms and is working to overthrow the Tehran regime through peaceful means.

AFP: A Nigerian judge on Tuesday postponed his verdict...