Reuters: Four U.S. congressmen met an Iranian dissident leader on Sunday and urged President Barack Obama to treat her group as an alternative to Tehran’s government, four months after its removal from a list of terrorist organizations. By Nicholas Vinocur 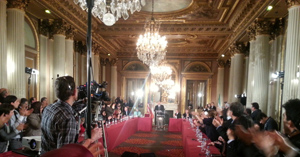 PARIS (Reuters) – Four U.S. congressmen met an Iranian dissident leader on Sunday and urged President Barack Obama to treat her group as an alternative to Tehran’s government, four months after its removal from a list of terrorist organizations.

The bipartisan group pressed Obama to talk to the Paris-based National Council of Resistance of Iran (NCRI) rather than Tehran, after Iran’s highest authority rebuffed an offer of talks by U.S. Vice President Joe Biden.

“The Administration should be talking to members of the Iranian opposition, as our delegation did today, instead of fruitless talks with the Iranian rulers,” the delegation from the House Foreign Affairs Committee said in a statement.

Biden signaled U.S. willingness to hold direct talks with Tehran to try to break the impasse in the long-running dispute between the West and Iran over the country’s nuclear program. Iran says it is enriching uranium for peaceful energy only, but the West fears it is developing a nuclear bomb.

With Iran holding its own presidential elections in June, hopes of progress on the issue before then are limited.

The encounter at a Paris hotel marked the first time members of U.S. Congress met officially with NCRI leader Maryam Rajavi since the U.S. State Department dropped her group from a list of terrorist organizations last September.

Dana Rohrabacher (R-CA), Chairman of the Subcommittee on Europe, Eurasia and Emerging Threats, was among U.S. congressmen who pressed for its removal in the wake of a bloody attack on its members at Camp Ashraf in Iraq in 2011.

He urged Iraq’s government to explain its failure to protect Iranian dissidents who came under attack again on February 9 in a camp near Baghdad where some 400 refugees had been relocated.

“The mullahs couldn’t do it on their own so we know that Prime Minister al-Maliki must be working with the Mullah dictatorship to accomplish this end,” he told journalists.

Rohrabacher accused Iraqi Prime Minister Nouri al-Maliki of having allowed Iranian agents to carry out the attack and said he would seek a resolution in Congress naming Iraq a state sponsor of terrorism if another attack occurred.

Rajavi, whose group is an umbrella bloc of five opposition groups in exile that seek an end to Shi’ite Muslim clerical rule in Iran, said the attack showed that residents of the camp were in danger and urgently needed to be relocated.

“We need an immediate solution since a similar attack can take place any day and any minute,” she told journalists.

Rajavi said solutions included the return of residents to Ashraf while they awaited resettlement in third countries and their immediate recognition as refugees by the United Nations High Commissioner for Refugees.

AFP: Crowds of people hurled eggs and tomatoes at...

Washington Times: Iran yesterday said it is not negotiating...