AFP: Kuwait’s supreme court on Monday upheld life terms on two Iranians, a Kuwaiti and a stateless person on charges of forming a ring to spy for neighbouring Iran. 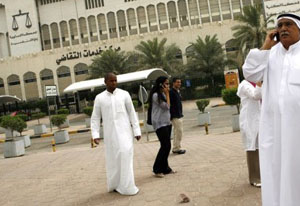 KUWAIT CITY, Kuwait (AFP) — Kuwait’s supreme court on Monday upheld life terms on two Iranians, a Kuwaiti and a stateless person on charges of forming a ring to spy for neighbouring Iran.

The court, whose rulings are final, also upheld the acquittal of two Iranians, including the only woman in the ring, and a Syrian, a statement issued by the court said.

“The court rejects the appeals of the defendants and upholds the (court of appeals) sentences,” judge Abdullah al-Jassem said in the statement.

In May last year, the appeals court reduced death sentences against the first three to life and upheld the same term on the fourth. The court also acquitted the Syrian who was sentenced to life by the lower court.

The two Iranians and the Kuwaiti worked for the Kuwait’s army at the time of their arrest in May 2010, while the stateless person was a former soldier.

The defendants were accused of spying for Iran and of passing information on the Kuwaiti and US military in the Gulf emirate to the Islamic republic’s Revolutionary Guards, an accusation Iran has denied.

The charges also included plans to blow up some key oil pipelines in the oil-rich Gulf state.

The defendants, throughout the trial, denied the charges and insisted they had been tortured to extract confessions.

The case strained relations between Kuwait and neighbouring Iran, prompting a tit-for-tat expulsion of diplomats after investigations showed the information were passed to diplomats in Tehran’s embassy in Kuwait City.

Ambassadors and diplomats later returned to both capitals following a visit by Iran’s Foreign Minister Ali Akbar Salehi to Kuwait City on May 11, 2011.

Ahmadinejad Called for the Release of Baghaei