Iran’s Khamenei says US can not be trusted 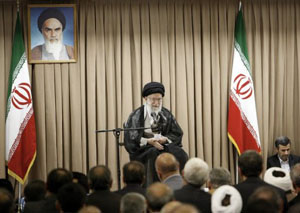 “I said at the beginning of the (Iranian) year that I am not optimistic about negotiations with the US, though in the past years I did not forbid negotiating (with them) about certain issues like Iraq,” he told top officials at an “iftar” evening meal that breaks the daily fast during the Muslim holy month of Ramadan.

Khamenei said in March he was “not optimistic” over the prospects of direct talks with Tehran’s archfoe on the sidelines of its nuclear negotiations with major powers.

“The Americans are … not trustworthy and they are not honest in their encounters… The stance of American officials over past months once again confirms that one should not be optimistic,” he said at the iftar, attended by centrist cleric Rowhani and outgoing President Mahmoud Ahmadinejad.

The comments from Khamenei, who has the final say in the regime’s macro policy issues, came less than a week after former US officials and dozens of American lawmakers called for President Barack Obama to pursue diplomacy with Rowhani.

In a letter to Obama, the ex-policymakers said the election of Rowhani, who takes office on August 3, “presents a major potential opportunity.”

“We strongly encourage your administration to seize the moment to pursue new multilateral and bilateral negotiations with Iran once Rowhani takes office and to avoid any provocative action that could narrow the window of opportunity for a more moderate policy out of Tehran,” they wrote.

And two members of the House of Representatives — Republican Charles Dent and Democrat David Price — have led a call for Obama to “utilise all diplomatic tools” with Iran’s new president. The lawmakers noted that the presidency in Iran had limited powers but said it “would be a mistake not to test” Rowhani.

“In interacting with the world it’s a skill to continue your path without the other side being able to prevent you. If not you have lost,” Khamenei added, alluding to Iran’s future nuclear talks with world powers after Rowhani, who once served as his country’s top nuclear negotiator, takes over from Ahmadinejad.

Rowhani who won a June presidential election has since vowed to engage constructively with the international community and to ease tensions raised by Tehran’s nuclear ambitions.

“Moderation in foreign policy means neither surrender nor confrontation but constructive and efficacious interaction with the world,” Rowhani has said.

Obama at the start of his first term in office in 2009 offered talks with Iran, which has not had relations with the United States since its 1979 Islamic revolution which overthrew the pro-Western shah.

The United States has led a drive to cut off Iran’s oil exports, its key source of revenues, as a way to pressure the regime over its controversial nuclear work.

Western powers and Israel believe the programme is being used to develop an atomic bomb, although Iran insists it is solely for peaceful purposes.

Determining the Subsistence Basket at 6.895 Million Tomans, a Step To Destroy Iran’s Workers

A tripartite committee, the representative of the government, employers...