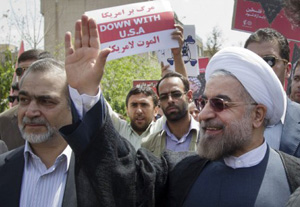 Rouhani said the Iranian people and their government will “spare no effort” in supporting the nation.

Western governments have tightened the sanctions pressure on Iran as punishment for a controversial nuclear program. The United States and its allies suspect Iran is trying to develop a nuclear weapon, an allegation the Iranian government denies.

Rouhani, a former nuclear negotiator, said his adversaries have so far been unable to cripple Iran’s general ambitions.

“Since the early stages of the Islamic Revolution, the enemies have failed to bring the Iranian nation to its knees,” he was quoted by the semiofficial Fars News Agency as saying.

“They agree and share a concern about the ongoing threat of nuclear weapons from Iran and from North Korea,” she said.

By Pooya stone It is believed that over half...