AFP: New Delhi and Tehran were Saturday working to resolve a dispute over the detention of an Indian oil tanker by Iranian naval guards for allegedly polluting sea waters in the Persian Gulf. 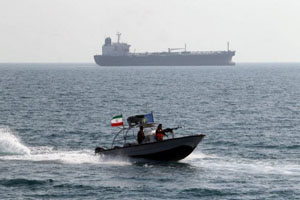 NEW DELHI (AFP)— New Delhi and Tehran were Saturday working to resolve a dispute over the detention of an Indian oil tanker by Iranian naval guards for allegedly polluting sea waters in the Persian Gulf.

The Indian government-owned MT Desh Shanti ship was on its way back to India from Iraq when it was stopped Tuesday by the Iranian authorities and taken to Bandar Abbas port.

“We are working with Iran through diplomatic channels both in New Delhi and Tehran to resolve the issue,” a foreign ministry spokesman told AFP.

The development comes at a time when India, the world’s fourth-largest oil importer, has significantly reduced its import of crude oil from Iran with sanctions from the United States and Europe making it harder to ship fuel from the Islamic republic.

The US and EU have shut down use of their financial systems for payment for Iranian crude, in the hope of starving Tehran of cash and forcing it to give up its alleged nuclear weapons programme.

Iran says its nuclear programme is for civilian purposes.

Local Indian media reports have suggested that Iran may have detained the ship out of “displeasure” because it was carrying crude from rival Iraq.

“For India, it is not far-fetched to draw the conclusion that Tehran is peeved with India’s rising crude imports from Iraq and that the seizure of the ship may be a way of showing its displeasure,” the Times of India newspaper said.

But the Iranian embassy in New Delhi sought to downplay the incident, calling it “purely a technical and non-political issue”.

“The officials of the shipping authorities of the two countries are engaged in constructive and positive interaction to resolve it according to the international law as soon as possible,” the embassy said in a statement.

The tanker, the embassy said, was detained following a warning from the Marine Emergency Mutual Aid Center, a Bahrain-based organisation which fights marine pollution.

The ship had cleared inspections by “maritime authorities and international surveyors”, the Press Trust of India news agency quoted a shipping ministry official as saying.

In Iran, a long night of fiery protests (Photo report – 4)

AFP: The Austrian government authorised the sale of 800...