AFP: Failure to take military action against Syria would send a dangerous signal to Iran, North Korea and other US foes, Secretary of State John Kerry said Tuesday. “Iran is hoping you look the other way,” Kerry told lawmakers. 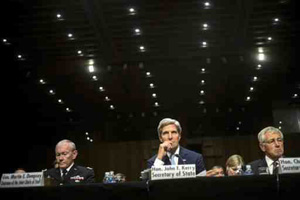 WASHINGTON (AFP) — Failure to take military action against Syria would send a dangerous signal to Iran, North Korea and other US foes, Secretary of State John Kerry said Tuesday.

“Iran is hoping you look the other way,” Kerry told lawmakers, as he made the case for Congress to endorse punitive US strikes against the Syrian regime over its suspected use of chemical weapons.

“Our inaction would surely give them (Iran) a permission slip for them to at least misinterpret our intention, if not to put it to the test,” Kerry told the Senate Foreign Relations Committee.

Hezbollah militants in Lebanon are “hoping that isolationism will prevail,” and “North Korea is hoping that ambivalence carries the day,” he said.

“They are all listening for our silence.”

Defense Secretary Chuck Hagel offered a similar view, arguing that if the United States chose not to act, it would appear weak in the showdown with Iran over its nuclear program.

“A refusal to act would undermine the credibility of America’s other security commitments, including the president’s commitment to prevent Iran from acquiring a nuclear weapon,” Hagel told the same hearing.

“The word of the United States must mean something.”

The United States has repeatedly refused to rule out military action against Iran over its disputed nuclear program and Israel has pressed Washington to issue tough language vowing to prevent Tehran from acquiring atomic weapons.

Hagel also said South Korea’s defense minister had expressed concern about how Pyongyang would interpret the US response to the Syria crisis.

In a meeting in Brunei last week, Seoul’s defense minister and Hagel spoke “about the threat that North Korea’s stockpile of chemical weapons presents to them,” the Pentagon chief said.

US allies “must be assured that the United States will fulfill its security commitments,” he added.

Hagel said Hezbollah or other militant groups could opt to acquire or use chemical weapons if Washington failed to punish Damascus.

“We will either send a message to Syria, Iran, North Korea, Hezbollah, Al-Qaeda, and any other non-state actors that the world will not tolerate the senseless use of chemical weapons by anyone or we will choose to stand silent in the face of horrific human suffering,” he said.

Tuesday’s hearing came after Obama on Saturday said he wanted the US Congress to authorize military action against Damascus, putting off for the moment possible cruise missile strikes.