Obama told to ‘up his game’ to persuade congress on Syria

Bloomberg: President Barack Obama and his aides are meeting resistance from multiple directions as they seek congressional backing for military action against Syria, and a prominent critic told the president to “up his game.” 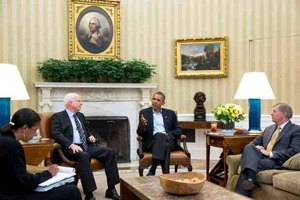 President Barack Obama and his aides are meeting resistance from multiple directions as they seek congressional backing for military action against Syria, and a prominent critic told the president to “up his game.”

Obama won conditional support yesterday from Republican Senators John McCain and Lindsey Graham. They left a White House meeting yesterday urging their fellow lawmakers, many of whom are balking at the prospect of another U.S. entanglement in the Middle East, to support a limited strike against Syrian President Bashar al-Assad’s regime.

While both criticized the administration’s approach to Syria over the last two years, McCain and Graham said they came away from their session with the president more comfortable with the strategy he’s considering.

Obama now must do a better job of explaining it to lawmakers and the U.S. public, Graham said.

“We urge president to up his game,” he said after leaving the meeting with Obama and National Security Adviser Susan Rice.

Syria remained defiant amid the debate in Washington. In an interview with the French newspaper Le Figaro, published yesterday, Assad called the Middle East “a powder keg” and warned that a U.S. attack might have uncontrollable regional consequences. He also said the U.S. has failed to prove that his forces used chemical weapons.

To win approval for a congressional resolution authorizing the use of U.S. military force against Syria, the administration is under pressure from some lawmakers to produce stronger evidence that Assad’s regime ordered the attack.

At the same time, Obama must navigate among competing factions in Congress that cross party and regional lines. The blocs range from lawmakers, such as McCain and Graham, who argue for more robust support for Syrian rebels to members such as Republican Senator Rand Paul of Kentucky, who questions whether the U.S. has any stake in the Syrian civil war.

By bringing Arizona’s McCain and South Carolina’s Graham to the White House for a private meeting, the administration tacitly acknowledged the influence they wield as prominent Republican voices in the Senate on national security matters.

Asked whether Obama wanted the two senators to deliver a specific message to congressional colleagues, McCain, who was Obama’s Republican opponent in the 2008 presidential race, laughed and said: “I don’t think he called us over because we’re old campaign pals.”

Obama last spoke publicly on Aug. 31, when he made a surprise announcement that he’d seek support from Congress, after saying earlier he had authority to order a military mission in response to what his administration and the French and U.K. governments say was the Syrian regime’s August 21 chemical weapons attack on civilians.

While no president has ever been denied congressional authorization to use military force, Obama’s request met immediate criticism. Democratic and Republican lawmakers said the resolution he requested was too broad and open-ended, even though the president has repeatedly said he planned only a limited, narrowly focused military response.

Aides to Senate Majority Leader Harry Reid, a Nevada Democrat, and the Senate Foreign Relations Committee are already drafting a new, limited use-of-force resolution, according to a Senate Democratic aide who requested anonymity to discuss internal deliberations. An administration official, who also asked for anonymity, said the president is willing to work with Congress on revised language.

After briefings for lawmakers by top administration officials during the weekend and rounds of telephone calls by Obama, Vice President Joe Biden and Secretary of State John Kerry, there were few signs that opponents were reconsidering.

“I don’t think people’s minds are changing,” said Representative Tom Cole, an Oklahoma Republican. Cole said he is undecided on how he’ll vote.

“They have a selling job to do,” McCain said. “We have to make it clear that a vote against this would be catastrophic in its consequences.”

McCain said lawmakers must be assured by the president that this effort is a change from the administration’s “past two years of neglect” regarding Syria. A weak response would be as bad as doing nothing, he and Graham said.

Both men also warned isolationists in their own party that ignoring Syria imperils U.S. security and would embolden Iran.

No vote is scheduled before Congress returns to session Sept. 9. Obama leaves tonight for a trip to Sweden and the summit of the Group of 20 nations in St. Petersburg, Russia.

Before he departs, the president is calling in Democratic and Republican leaders of the House and Senate, along with the chairmen and ranking minority members of the congressional committees that deal with national security matters. He’s also sending Kerry, Defense Secretary Chuck Hagel and Army General Martin Dempsey, chairman of the Joint Chiefs of Staff, to testify today before the Senate Foreign Relations Committee.

With any military strike delayed, oil fell for a third day. The region supplies about a third of the world’s crude. West Texas Intermediate futures for October delivery fell 83 cents to $106.82 a barrel as of the halt of holiday electronic trading at 1:15 p.m. on the New York Mercantile Exchange.

After Parliament forced U.K. Prime Minister David Cameron to drop out of any military coalition against Syria, the French alone among major U.S. European allies have said they’re willing to participate.

The French government made public yesterday a nine-page declassified intelligence assessment that said the Aug. 21 chemical weapons attack could have been carried out only by the Syrian regime.

The declassified U.S. intelligence assessment issued last week said with “high confidence” that the regime conducted the attack, although it didn’t provide any evidence linking the action directly to an order from Assad. The report said the U.S. has evidence that Syria’s military made preparations to use chemical weapons and that satellites showed the rocket attacks originated in regime-controlled areas.

Russia, Assad’s ally and the host of the G-20 summit, isn’t persuaded by the American chemical-weapons evidence and believes a U.S. attack would thwart plans to restart reconciliation talks in Geneva between the Syrian government and its opponents, Foreign Minister Sergei Lavrov said.

“If action announced by the U.S. president does take place after all, to our deepest regret, then regardless of what has been said about Geneva II, the prospects of this forum are being put off for a long time, if not forever,” Lavrov told reporters in Moscow yesterday.

AP: At a time of growing nuclear tensions in...