PR Newswire: Organization of Iranian American Communities (OIAC) commended bi-partisan effort in the U.S. Congress to strengthen economic sanctions on Iran, arguing sanctions has been a key factor in forcing the regime to come to the negotiating table. 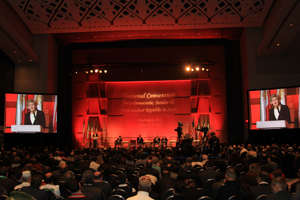 WASHINGTON, PRNewswire-USNewswire/ — In November 2013, Western powers agreed to a controversial “Joint Plan of Action” with the Iranian theocracy, the stated goal of which was decelerating and eventually halting Iran’s nuclear weapons program and allowing for a measure of transparency.

On behalf of Iranian-American communities in 38 states across America, Organization of Iranian American Communities (OIAC), while views this interim accord as a potentially useful first step but by no means sufficient to guarantee a definitive end to Tehran’s quest for nuclear arms.

As such we commend bi-partisan effort in both chambers of the U.S. Congress to maintain and strengthen economic sanctions on the dictatorial regime ruling Iran, since sanctions has been a key factor in forcing the Iranian regime to come to negotiating table.

We, in particular, laud the efforts of the bi-partisan senate majority for working to keep the Iranian regime accountable for its thirty years of deception and denial as it pertains to the nuclear file.  We have learned through decades of campaign for democracy and freedom in Iran that a, diplomatic insurance policy against the Iranian regime, is not a political maneuver but an existential necessity.

We also laud the proper understanding and approach by key members of House of Representatives that the Iranian regime has a consistent history of obfuscation, and is capable of cheating, making it an imperative that sanctions should always be hanging there because that’s what brought Iran to the table in the first place.

This is precisely what OIAC as the legitimate representative of a vast majority of Iranian-Americans in the United States has been urging, because sanctions are an important leverage in averting war and ultimately empowering the Iranian people to establish a non-nuclear, democratic and secular republic in Iran, which would be at peace with its neighbors in the Middle East.