PRNewswire: A high-level cross-party delegation of British parliamentarians from both Houses of Commons met today with the leader of the Iranian opposition to pursue a humanitarian issue that threatens the lives of thousands. 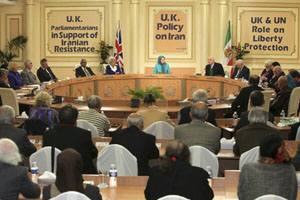 PARIS /PRNewswire/ A high-level cross-party delegation of British parliamentarians from both Houses of Commons met today with the leader of the Iranian opposition to pursue a humanitarian issue that threatens the lives of thousands.

The meeting involved the British lawmakers and Mrs. Maryam Rajavi, President-elect of the National Council of Resistance of Iran (NCRI), in the council’s headquarters in north of Paris.

At issue was the plight of more than 3,000 Iranian dissidents in Iraq, who have been subjected to assaults, missile attacks and other forms of terror that have left scores dead, hundreds wounded, and seven held hostage.

According to NCRI the attacks are being carried out by Iraqi government at the behest of the mullahs in Iran to whom Nouri Maliki is beholden.

The meeting was arranged at the initiative of the British Parliamentary Committee for Iran Freedom, which enjoys the support of a majority in the House of Commons and 200 peers.

Baroness Boothroyd, former Commons Speaker, said, “Iraq not only has proven to be incapable of providing protection for residents of Ashraf and liberty, it has been responsible for massacre of these people.” Lord Carlile commented: “My concern is that remaining in Camp liberty is a death warrant… Mr. Rouhani is pulling the wool over eyes of the Western governments.”

Mrs. Rajavi commended the British Parliament’s support for the Iranian people and the resistance and noted that the Iranian regime is facing extensive internal crises, which have led to its retreat its nuclear weapons project. She told the parliamentarians that, to save its balance, “Iranian regime has intensified its violation of human rights by increasing the number of executions, and has stepped up its interference in Syria, Iraq, Lebanon, Yemen, and other countries in the region at an unprecedented scale.”

Furthermore, she said, it is using its puppet government in Iraq “to do its utmost to massacre the residents of Ashraf and Camp Liberty while concurrently capitalizing on the feeble stance of the international community to continue its deceptive and clandestine activities concerning its nuclear weapons project.”

The British delegation strongly condemned the “horrific violation of human rights” in Iran, including more than 700 executions in 2013, two-third of which were carried out during the presidency of the “moderate” Hassan Rouhani.

While declaring their solidarity with the PMOI members in Camp Liberty, the UK delegation strongly criticised the UK government for its inaction towards their plight.

Bloomberg: The People's Mujahedeen of Iran won a European...