US sees Iran behind hostage photos of ex-FBI agent

AP: Two years after a hostage video and photographs of retired FBI agent Robert Levinson raised the possibility that the missing American was being held by terrorists, U.S. officials now see the government of Iran behind the images, intelligence officials told The Associated Press. The Associated Press

By By ADAM GOLDMAN and MATT APUZZO 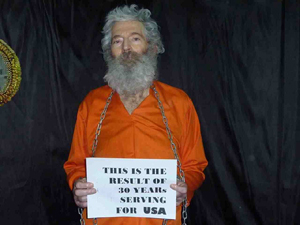 WASHINGTON (AP) — Two years after a hostage video and photographs of retired FBI agent Robert Levinson raised the possibility that the missing American was being held by terrorists, U.S. officials now see the government of Iran behind the images, intelligence officials told The Associated Press.

Levinson, a private investigator, disappeared in 2007 on the Iranian island of Kish. The Iranian government has repeatedly denied knowing anything about his disappearance, and the disturbing video and photos that Levinson’s family received in late 2010 and early 2011 seemed to give credence to the idea.

The extraordinary photos — showing Levinson’s hair wild and gray, his beard long and unkempt — are being seen for the first time publicly after the family provided copies to the AP. The video has been previously released.

In response to Iran’s repeated denials, and amid secret conversations with Iran’s government, Secretary of State Hillary Clinton said in a statement in March 2011 that Levinson was being held somewhere in South Asia. The implication was that Levinson might be in the hands of terrorist group or criminal organization somewhere in Pakistan or Afghanistan.

The statement was a goodwill gesture to Iran, one that the U.S. hoped would prod Tehran to help bring him home.

Two years later, with the investigation stalled, the consensus now among some U.S. officials involved in the case is that despite years of denials, Iran’s intelligence service was almost certainly behind the 54-second video and five photographs of Levinson that were emailed anonymously to his family. The tradecraft used to send those items was too good, indicating professional spies were behind them, the officials said, speaking on the condition of anonymity because they weren’t authorized to talk publicly. While everything dealing with Iran is murky, their conclusion is based on the U.S. government’s best intelligence analysis.

The photos, for example, portray Levinson in an orange jumpsuit like those worn by detainees at the U.S. prison at Guantanamo Bay. The family received them via email in April 2011. In each photo, he held a sign bearing a different message.

Another read: “This is the result of 30 years serving for USA.”

Iranian President Mahmoud Ahmadinejad has personally and repeatedly criticized the U.S. over its detention facility at Guantanamo Bay.

U.S. operatives in Afghanistan managed to trace the cellphone used to send the photographs, officials said. But the owner had nothing to do with the photos, and the trail went cold.

It was that way, too, with the hostage video the family received. It was sent from a cyber cafe in Pakistan in November 2010. The video depicted a haggard Levinson, who said he was being held by a “group.” In the background, Pashtun wedding music can be heard. The Pashtun people live primarily in Pakistan and Afghanistan, just across Iran’s eastern border.

Yet the sender left no clues to his identity and never used that email address again.

Whoever was behind the photos and video was no amateur, U.S. authorities concluded. They made no mistakes, leading investigators to conclude it had to be a professional intelligence service like Iran’s Ministry of Intelligence and Security.

Levinson’s wife, Christine, provided the photos to The Associated Press because she felt her husband’s disappearance was not getting the attention it deserves from the government.

“There isn’t any pressure on Iran to resolve this,” she said. “It’s been much too long.”

Though U.S. diplomats and the FBI have tried behind the scenes to find Levinson, of Coral Springs, Fla., and bring him home, both presidents George W. Bush and Barack Obama have said little about his case and have applied little public pressure on Iran for more information about Levinson’s whereabouts.

Christine Levinson has watched more public pressure result in Iran’s release of a trio of hikers, a journalist named Roxana Saberi and a team of British sailors captured by the Iranian Navy. Everyone has come home except her husband.

“We assumed there would be some kind of follow-up and we didn’t get any,” Christine Levinson said. “After those pictures came, we received nothing.”

In one meeting between the two countries, the Iranians told the U.S. that they were looking for Levinson and were conducting raids in Baluchistan, a mountainous region that includes parts of Pakistan, Iran and Afghanistan, U.S. officials said. But the U.S. ultimately concluded that the Iranians made up the story. There were no raids, and officials determined that the episode was a ruse by Iranian counterintelligence to learn how U.S. intelligence agencies work.

In a statement late Tuesday, Alireza Miryusefi, a spokesman for Iran’s U.N. Mission, said the Iranian government has been assisting the Levinson family to find the ex-FBI agent. “Even his family traveled to Iran and were accommodated by the government. Further investigation proved that Levinson is not in Iran and there is no single evidence that he is in Iran.”

The spokesman added: “It is a very important to find an FBI agent who had traveled to a free zone of Iran, which if he is found, then the U.S. should explain why the said agent has been sent to Iran and what was his mission.”

An expert on Russian organized crime, Levinson retired from the FBI in 1998 and became a private investigator. He was investigating cigarette smuggling in early 2007, and his family has said that took him to the Iranian island of Kish, where he was last seen. Kish is a popular resort area and a hotbed of smuggling and organized crime. It is also a free trade zone, meaning U.S. citizens do not need visas to travel there.

FBI spokeswoman Jacqueline Maguire said: “As we near the sixth anniversary of his disappearance, the FBI remains committed to bringing Bob home safely to his family.”

In an interview, Levinson’s wife said that because her husband disappeared in Iran, she believes her husband is still being held there. She doesn’t think the U.S. government has put enough pressure on Iran to release her husband.

“It needs to come front and center again,” Levinson said. “There needs to be a lot more public outcry.”

She said she has met with Obama and John Brennan, Obama’s counterterrorism czar and nominee to run the CIA. She said that both men pledged to do everything they could to free her husband. Now, nearly six years after his disappearance, she thinks Iran is being let off the hook.

Meanwhile, Robert Levinson will miss another family milestone when his oldest daughter Susan gets married in February.

“He’s missed so many,” his wife said. “It’s very upsetting.”

AFP: The United States needs to strike Syria in...