Fox News: Iran is facing a water shortage so severe residents of the capital Tehran and other major cities may face rationing in the coming year. Nowhere is the shortage more apparent than in western Lake Urmia—once Iran’s largest lake. 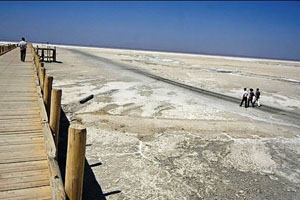 Iran is facing a water shortage so severe residents of the capital Tehran and other major cities may face rationing in the coming year.

Nowhere is the shortage more apparent than in western Lake Urmia—once Iran’s largest lake—which has devolved into a dry plain, the New York Times reported.

Lake Urmia was once one of the largest salt lakes in the world, measuring 90 miles long and about 35 miles wide, making it slightly larger than Great Salt Lake in Utah.

Environmental official Hamid Ranaghadr remembers how just a decade ago, cruise ships filled with tourists jammed the lake’s waters in search of flocks of migrating flamingos.

Today, the ships are rusting in caked mud and the flamingos fly over the remains of the lake on their way to more promising spots.  The local environmental office says only 5 percent of the Lake Urmia water remains.

Iranian President Hassan Rouhani has called the dwindling water supply a national security issue, and has promised to bring it back.

Experts name wasteful irrigation practices, climate change, and the depletion of groundwater supplies as major factors in the growing water shortage. In Lake Urmia, the completion of a series of dams choked off a large supply of fresh water from the mountains towering on either side of the lake.

“Only some years ago the water here was 30 feet deep,” Ranaghadr told the Times.

In the area surrounding Lake Urmia, islands where tourists once spent vacations overlooking the blue waters are now surrounded by plains of sand and brown mud. “We just emptied it out,” Ranaghadr said.

Environmentalists warn that the dried salt could poison valuable agricultural lands surrounding the lake, adversely affecting the three million people who live in the area.

Other lakes and major rivers have also been drying up in Iran, causing disputes over water rights, demonstrations and even riots.

Major rivers near Isfahan, in central Iran, and Ahvaz, near the Persian Gulf, have lost water, as has Hamoun Lake, near the Afghanistan border. Dust from the dry riverbeds has not helped the already dangerously high air pollution problem in Iran.

Most people in the area blame the half-dozen major dams the government has built in the region for the lake’s disappearance. The dams have greatly reduced the flow of water in the 11 rivers that feed into the lake. As an arid country with many lofty mountain chains, Iran has a predilection for dams that goes back to the reign of Shah Mohammed Reza Pahlavi.

Dam construction was given renewed emphasis under former Iranian president Mahmoud Ahmadinejad. Another driving force is the Islamic Revolutionary Guards Corps, which builds many of the dams in Iran and surrounding countries.

The dams produce vital electricity, and are intended to address the water shortage. But experts say too often, inefficient irrigation techniques waste water.

In recent years the amount of land dedicated to agriculture in the region has tripled, and many farmers have chosen to grow crops like grapes and sugar beets, which require high amounts of water, Ranaghadr said. His environmental office has calculated that about 90 percent of all the water that should end up in the lake is instead used on fields.

“They turn open the tap, flood the land, without understanding that in our climate most of the water evaporates that way,” said Ali Reza Seyed Ghoreishi, a member of the local water management council. “We need to educate the farmers.”

Many of the new land owners dug new wells, soaking up much of the groundwater. “There are around 30,000 legally dug wells and an equal amount of illegal wells,” Ghoreishi said. “As the water is becoming less, they have to dig deeper and deeper.”

Rising temperatures in the area have also played a role in the shortage. A long drought ended two years ago, but even the increased rainfall has not helped enough.

“We are all to blame,” Ranaghadr said. “There are just too many people nowadays, and everybody needs to use the water and the electricity the dams generate.”

The Rouhani government– low on funds because of the impact of international sanctions against Iran’s nuclear program– has not made any funds available for efforts to restore Lake Urmia.

But officials say, it’s probably too late to save Lake Urmia. It would likely take decades for the water to reach its old levels.

In 2010 and 2011, violent protests over the fate of the lake broke out in Urmia, and security forces had to be flown in to restore order.

“We are not allowed to speak of the lake,” said Morteza Mirzaei, an Urmia resident. “But they built their dams, and now everything is gone.”

Reuters: Turkcell has failed to secure a 49 percent...

UPI: Before any future talks with Iran, Obama administration...