Al-Monitor: While Iranian officials have admitted to having sent “advisers” into Syria, that Iran has active fighters is addressed only when the hard-line media mention that a fighter has been killed in Syria. 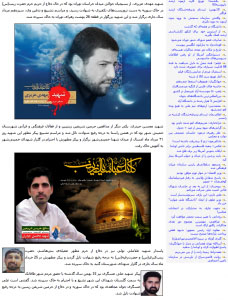 Hard-line Iranian University Students News (IUSN) published the names of 15 Iranians killed who had volunteered to go to Syria.

While Iranian officials and commanders have admitted to having sent “advisers” into Syria to assist the Syrian government in its fight against the opposition, that Iran has active fighters is addressed only when the hard-line media mention that a fighter has been killed in Syria “defending the Shrine of Zeinab,” which is the official line on those who die in Syria.

Iran has mandatory military service, but those who have gone to fight in Syria are most likely part of the Islamic Revolutionary Guard Corps’ Quds Force that have chosen to fight in Syria. In the Iranian hard-line media are typically shown pictures of their funerals and posters of them with the Shrine of Zeinab in Damascus. In September of 2013, video footage of an Iranian commander and cameraman revealed that Iran’s role in training militias across the region was deeper than officials had suggested.

Why IUSN chose to compile a list of names and publish them along with their pictures at this moment is not clear. Their dates of their death and burial places were also noted.

Iranian hard-liners have not expressed support for President Hassan Rouhani’s position that the Syrian civil war has a political solution. In fact, immediately after Rouhani’s election, the first pictures of Iranians killed in Syria surfaced in a hard-line newspaper. Some viewed the publication of the pictures as hard-liners’ opening move in staking out a position before the new administration, which has openly advocated for decreasing tensions with the world, could express a more moderate position on Syria.

Discussion and debate over Syria in the Iranian media is almost non-existent, with the exception of statements by Iranian officials or commanders giving various reasons for continuing to support the Syrian government.

Syria was the only Arab country to support Iran during the Iran-Iraq war, while the countries in the Persian Gulf supported then-President Saddam Hussein, a point not lost on the Iranian war veterans who are the commanders of today. In March 2013, then-Foreign Minister Ali Akbar Salehi said that Iran “will never forget the support of Syria during the imposed war,” the common term in Iran for the Iran-Iraq war.

Syria is also the supply line to Hezbollah, described as the “crown jewel” of the resistance bloc consisting of Iran, Syria and Hezbollah that rejects Israeli and American hegemony in the region.

Some Iranians also see the war in Syria as the beginning stages of a war against Iran. The sole Reformist candidate in 2013 presidential elections, Mohammad Reza Aref, was asked his thoughts on the Syrian civil war. He said that defending Syria was necessary because if Syria falls, then those fighting Syria would go after Hezbollah and ultimately come after Iran.

Interestingly, this point was reiterated by Fredric Hof, a former ambassador and the US State Department’s  special adviser for Transition in Syria, at a congressional panel discussion on Tuesday. Hof, who said he was involved in track two talks with the Iranians on Syria, claimed that an Iranian official told him that Iran believes that “overthrowing President Bashar al-Assad would be a test before leading the bigger operation: toppling the Iranian regime.”

The Guardian: Doubts surrounded the future of Iran's foreign...

Corruption in Iran: 110 Million Dirhams Have Been Lost in Parsian Bank

By Pooya Stone Iranian banks are notorious for corruption....