New York Times: ran is building a nonworking mock-up of an American nuclear-powered aircraft carrier that United States officials say may be intended to be blown up for propaganda value.

WASHINGTON — Iran is building a nonworking mock-up of an American nuclear-powered aircraft carrier that United States officials say may be intended to be blown up for propaganda value.

Intelligence analysts studying satellite photos of Iranian military installations first noticed the vessel rising from the Gachin shipyard, near Bandar Abbas on the Persian Gulf, last summer. The ship has the same distinctive shape and style of the Navy’s Nimitz-class carriers, as well as the Nimitz’s number 68 neatly painted in white near the bow. Mock aircraft can be seen on the flight deck. 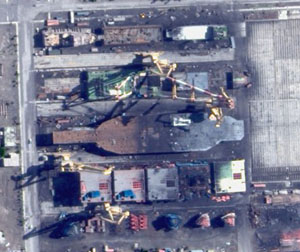 The Iranian mock-up, which American officials described as more like a barge than a warship, has no nuclear propulsion system and is only about two-thirds the length of a typical 1,100-foot-long Navy carrier. Intelligence officials do not believe that Iran is capable of building an actual aircraft carrier.

“Based on our observations, this is not a functioning aircraft carrier; it’s a large barge built to look like an aircraft carrier,” said Cmdr. Jason Salata, a spokesman for the Navy’s Fifth Fleet in Bahrain, across the Persian Gulf from Iran. “We’re not sure what Iran hopes to gain by building this. If it is a big propaganda piece, to what end?”

Whatever the purpose, American officials acknowledged on Thursday that they wanted to reveal the existence of the vessel to get out ahead of the Iranians.

Navy and other American intelligence analysts surmise that the vessel, which Fifth Fleet wags have nicknamed the Target Barge, is something that Iran could tow to sea, anchor and blow up — while filming the whole thing to make a propaganda point, if, say, the talks with the Western powers over Iran’s nuclear program go south.

Iran has previously used barges as targets for missile firings during training exercises, filmed the episodes and then televised them on the state-run news media, Navy officials said.

“It is not surprising that Iranian military forces might use a variety of tactics — including military deception tactics — to strategically communicate and possibly demonstrate their resolve in the region,” said an American official who has closely followed the construction of the mock-up.

But while Iran has tried to conceal its underground nuclear-related sites, the Iranian Navy has taken no steps to cloak from prying Western satellites what it is building pierside at the busy shipyard. “The system is often too opaque to understand who hatched this idea, and whether it was endorsed at the highest levels,” said Karim Sadjadpour, an Iran expert at the Carnegie Endowment for International Peace.

Iran has sought to exploit captured or pirated American military technology in the past. Last year, Iran’s political and military elite boasted that their forces had shot down an American intelligence-gathering drone, a remotely piloted Navy vehicle called ScanEagle that they quickly put on display for the Iranian news media.

Navy officials responded that no drones had been shot down by enemy fire, although the Pentagon acknowledged at the time that it had lost a small number of ScanEagles, likely to engine malfunction.

Iranian Navy officials could not be immediately reached for comment as the country prepared to celebrate its New Year festivities on Friday. American intelligence officials cited a photograph taken on Feb. 22 in Bandar Abbas and a brief description in Persian of the vessel on a website for Iran’s Ministry of Industry, Mines and Trade.

Until recently, Iranian fast-attack boats have harassed American warships, and the government in Tehran has deployed remotely piloted aircraft that carry surveillance pods and that may someday carry rockets.

With Iran’s multiple political bases of power, the government’s purposes can be hard to decipher. After the temporary nuclear agreement was reached in November between the world powers and the moderate government of Iran’s president, Hassan Rouhani, it was unclear to American officials whether Iran’s hard-line Islamic Revolutionary Guards Corps might try to provoke a conflict with the United States Navy to undercut the accord.

The navy of the Revolutionary Guards consists of fast-attack speedboats with high-powered machine guns and torpedoes, and crews that in the past employed guerrilla tactics, including swarming perilously close to American warships.

When the mock-up will take its maiden voyage — if it ever does — is anyone’s guess, analysts said. The vessel is nearing completion, they said, and will presumably be shipped by rail on tracks that run through the shipyard, to its destiny in the Persian Gulf just a few hundred yards away.

Washington Times: The United States and Israel are quietly...