Giuliani speaks on dangers from Iran

azcentral.com: Iran poses a serious threat to the United States, whose government is failing to counter it, former New York mayor and presidential candidate Rudy Giuliani told an enthusiastic crowd in Phoenix on Friday. 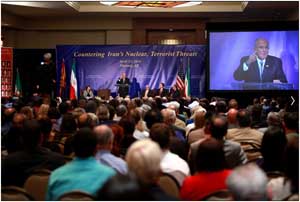 Iran poses a serious threat to the United States, whose government is failing to counter it, former New York mayor and presidential candidate Rudy Giuliani told an enthusiastic crowd in Phoenix on Friday.

Giuliani was invited by the Iranian American Community of Arizona to shine a light on the dangers of the Tehran regime. The gathering was titled “Countering Iran’s Nuclear, Terrorist Threats.”

In a speech before about 250 people packed into a ballroom in the Sheraton Phoenix Downtown Hotel, he denounced the regime and called for its overthrow, to a standing ovation.

“They are going on a killing spree inside Iran. To the world they present themselves as moderate. Internally, they present oppression, murder and suppression to frighten the hell out of (their people),” Giuliani said, citing Amnesty International figures that showed government killings had risen to 680 last year.

It was a theme of the two-hour presentation that also included Linda Chavez, a White House official in the Reagan administration, and Gen. George Casey Jr., who led U.S. forces in the Iraq conflict under President George W. Bush from 2004 to 2007.

All the speakers denounced the treatment of Iranian dissidents held inside an Iraqi prison camp. During the Iraq conflict, the U.S. government pledged to protect them. After the military withdrawal, the Iraqi government, which Giuliani called a puppet of Iran, slaughtered them.

A huge poster hung next to the podium, depicting the faces of each of the 52 Iranian dissidents killed in the most recent of six attacks, last September.

It served, too, as a backdrop to a sharp attack on the Obama administration’s handling of the Tehran regime, particularly ongoing negotiations over its nuclear program.

“They can’t be trusted. Why? Because they are the biggest state sponsor of terrorism. Because they killed more Americans than any other country. Because they sponsored genocide in Syria. Because they advocate the destruction of Israel. How many more reasons do you need? They shouldn’t be allowed to have any nuclear capacity at all,” the former mayor said to thunderous applause.

“This is like selling your house, not getting your money and letting the people move in,” Giuiliani said, after quoting from Iranian president Hassan Rouhani’s book, in which he reportedly bragged about pulling the wool over nuclear inspectors’ eyes.

Added Casey, “I can think of no other case in which democratic resistance against a regime is more warranted.”

The event began with a video featuring Maryam Rajavi, present-elect of the National Council of Resistance of Iran. In it, she called for a free, democratic and pluralistic government in Iran. Giuliani described her group as a known and trustworthy one to lead Iran. He ridiculed Obama’s stance on regime change elsewhere in the Muslim world, noting the president supported the ouster of a U.S. ally in Egypt and a weakened dictator in Libya.

“If John McCain or Mitt Romney were there, would any of this have happened? I know if Ronald Reagan was sitting in the White House, it wouldn’t.”