Rouhani’s presence in Paris is protested by thousands 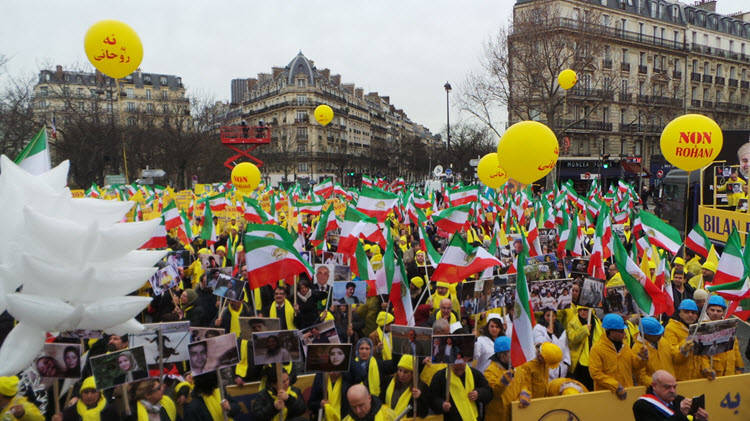 The leader of the clerical regime, President Hassan Rouhani, arrived in Paris to a wave of protests. Rouhani is one of the most senior officials responsible for the extreme and plentiful human rights violations in Iran. The protesters were Iranians, French citizens, human rights organizations, human rights activists and French and European political figures.

At the gathering, starting at noon at Place Denfert-Rochereau in Paris, the protesters called for French officials to denounce Rouhani for his grave human rights abuses. They called for Rouhani’s policy of export of terrorism and fundamentalism and for his involvement in the destructive conflicts in the region to be acknowledged.

The speakers denounced the appalling violations the Iranian regime is responsible for and vowed to continue supporting the Iranian Resistance. The speakers joined the protesters in their march – a touching sign of solidarity that shows their support of the goals of the protest.

The protestors chanted slogans and held signs with messages such as: “Rouhani is a criminal and enemy of Iranians”, “Death to the principle of velayat-e faqih, long live the Liberation Army”, “Criminal Rouhani, downfall will come”, “Thousand executions, death to Rouhani”, “Cry of every prisoner, death to Rouhani” and “Deal, contract, shame to this appeasement”.

Speakers highlighted that President Rouhani is one of the highest officials and firmest defenders of the velayat-e faqih system. They denounced his involvement in the suppression of the Iranian people, the massacre of Iranian dissidents in camps Ashraf and Liberty, and the slaughter of people in the region, especially in Syria and Iraq.

Many stressed that turning a blind eye to the violation of liberties in Iran, especially in a country of asylum where human rights are respected, is unacceptable. Many said that expanding economic relations and rapprochement with this regime at the expense of the Iranian people and Resistance is immoral and should be worthy of condemnation. They explained that it is a factor that exacerbates insecurity and conflict in the region and the world.

Speakers expressed their continued support for the Iranian Resistance and Mrs. Maryam Rajavi’s 10-point platform. They are in agreement that the establishment of a republic based on respect for human rights, separation of religion and state, gender equality, and peaceful co-existence are vital. They added that a free and democratic Iran is a fundamental necessity to stability in the Middle East.