Relations with Iran should be contingent upon a halt to executions 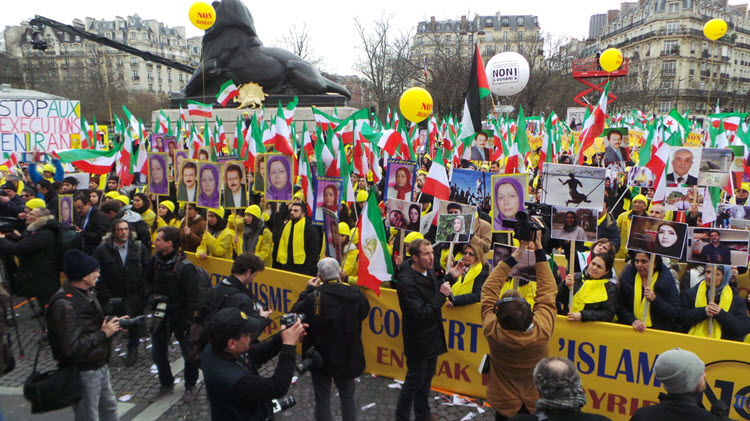 The National Council of Resistance of Iran on January 28, said that welcoming Hassan Rouhani to France and Italy is a mistake on the part of the western nations.

Regarding the visit by Hassan Rouhani, the President of the clerical regime, to Italy and France, Mrs. Maryam Rajavi, President-elect of the Iranian Resistance, stated that, “As a mullah, Hassan Rouhani is a defender of the ruling theocracy and has sworn allegiance to the velayat-e faqih (absolute rule of the supreme leader). Rouhani has been among the most senior officials of the religious fascism ruling Iran throughout the past 37 years and has been involved in all its atrocities. He should face justice for crimes against humanity.”

The statement went on to list facts about the terrible record of human rights abused under the president, who it is often argues is a “moderate”. There have been 2200 executions (the highest number in the past 25 years), all out support for the Assad dictatorship and the slaughter of the Syrian people, a missile attack against Camp Liberty residents, and the official order for the expansion of the ballistic missile program of the Revolutionary Guards (IRGC), which is tantamount to proliferation of Weapon of Mass Destruction.

Under Rouhani’s rule, suppression and executions of Sunni Muslims and Christians has increased and promises of economic prosperity have been broken. The NCRI says that Iran’s economic situation has deteriorated since The President has committed himself to pay for the expenditure of the wars of the IRGC and the regime’s para-military forces in Syria, Yemen, and Iraq.

The NCRI also states that, Rouhani’s claim to moderation is a lie meant to attract the West’s assistance in pursuing his mandate to save the crisis-riddled regime, which the overwhelming majority of Iranians seek to overthrow. “Yet, he is uninterested and incapable of distancing himself, in practice or in words, from the wave of executions in Iran and Bashar al-Assad’s massacre of the Syrian people. That explains why he has expressed unequivocal and explicit support for executions and for Bashar al-Assad.”

In the light of these facts and events, its is highly callous on the past of European governments to “welcome the godfather of terrorism and fundamentalism.” His welcome will strengthen the regime as a whole and its most repressive factions and it will cause harms to human rights in Iran.
It will also make the clerical regime in Iran bolder and further their purpose of warmongering in the region, especially in Syria, and export of Islamic extremism and terrorism.

The correct policy is that the relations with the Iranian regime to be made contingent upon a halt to executions and an improvement of human rights in Iran. “This is the will of the Iranian people and an imperative for peace and fighting terrorism in the region and the world,” the NCRI says.

Reporters Without Border condemns mistreatment of cyberjournalists and webloggers