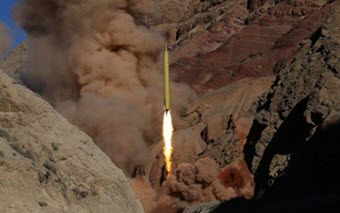 The United States, France and other countries have already said that, if the missiles are confirmed as nuclear-capable, the tests, conducted last week by Iran’s Revolutionary Guard Corps (IRGC), would violate United Nations Security Council resolution 2231, Reuters reported.

Asked whether this could trigger sanctions from the European Union, Ayrault said: “We condemn ballistic missile tests and, if necessary, sanctions will be enacted”.

The tests are due to be discussed by EU foreign ministers at a meeting on Monday.

U.S. Secretary of State John Kerry, whose country in January imposed sanctions on 11 companies and individuals for supplying Iran’s ballistic missile program after a series of tests at the end of last year, said the latest tests were a clear violation of UN Resolution 2231.

The United States plans to raise the issue in UN Security Council consultations this week and is urging other countries to help thwart Iran’s missile program.

“The missiles are a violation of the U.N. Security Council resolution because they are longer than the distance allowed for ballistic missiles and, because of that, they represent a potential threat to the countries in the region and beyond”, Kerry said.

“We have made it very clear that the missile concerns remain part of sanctionable activity with respect to Iran. If Iran chooses to violate that, they will invite additional sanctions, as we put them in place just a month ago as a result of the prior tests”.

Resolution 2231, adopted last July as UN sanctions imposed on Iran over its nuclear program were lifted, “calls upon” Iran to refrain from certain ballistic missile activity.

Western diplomats say this amounts to a clear ban, but acknowledge that Russia, China and Iran probably interpret it as an appeal for voluntary restraint, and that Russia and China would be likely to block any action by the Security Council. Iran says none of its missiles are designed to carry nuclear weapons.

Reuters: Iran has plans in place to deal quickly...

These days, the drop in Iran’s stock index has...