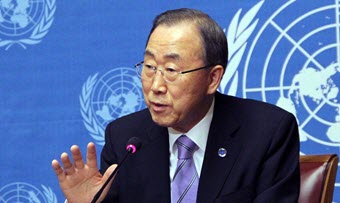 In the “current political atmosphere” in the Middle East and following the lifting of sanctions against Iran, the secretary-general called on the government of Iran to “act with moderation, caution and the good sense not to increase tensions through any hasty actions”, said UN spokesman Stephane Dujarric.

Ban said it was up to the UN Security Council to determine whether this was in violation of resolutions banning the development of ballistic missile technology capable of delivering a nuclear warhead.

The United States, Britain and France have said they are still examining the latest tests to determine whether the Security Council should respond.

UN diplomats have said it remains unclear when and if action will be taken at the Security Council over the latest tests, AFP reported.

In January, the US announced new sanctions on Iran over the test-launch of a medium-range missile in October that a UN panel of experts said was capable of carrying a nuclear warhead.

Under the historic nuclear deal reached with Tehran, most UN sanctions resolutions against Iran were lifted, but an arms embargo and restrictions on ballistic missile technology remain in force.

Reuters: The head of the U.N. nuclear agency arrived...