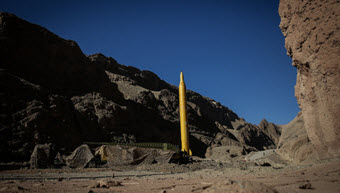 On March 9 the Iranian government tested two missiles capable of delivering a nuclear payload. On Tuesday the Associated Press obtained a joint letter of protest from the US, France, Britain and Germany.

The careful worded letter was sent to Spain’s United Nations Ambassador, who is assigned with co-ordinating UN Security Council discussions on resolution 2231, and UN Secretary General Ban Ki Moon. In the letter the four powers highlighted their concerns “that Iranian military leaders have reportedly claimed these missiles are designed to be a direct threat to Israel”.

This decision is likely compounded by Russia’s opposition to new sanctions on Iran. Both Russia and China, who wield veto-power on the Security Council previously lobbied against restrictions on Iran’s missile programme during the nuclear negotiations last year.

The fact that the missiles could be used to deliver nuclear weapons means they are “inconsistent with” and “in defiance of” the UN Security Council Resolution 2231, the four Western powers said. The resolution, which was adopted last July, was declared as a historic landmark in relations between Iran’s government and the international community.

As part of the resolution sanctions on Iran were lifted, although it included provisions for a “snap-back” system triggering the reinstatement of sanctions should there be non-compliance. Western officials have said that although the launches went against the Resolution 2231 they were not a violation of the core agreement with the P5+1 group, composed of Britain, China, France, Germany, Russia and the United States.

Several Western diplomats have indicated that public rebukes were the extent to which Iran would be punished. The resolution requires that sanctions only be triggered if Iran conducted atomic work. However other forums such as the European Union may consider sanctions and legal actions. Following talks with American and European allies the French Foreign Minister Jean-Marc Ayrault said that sanctions would be taken “if necessary”.

The US has already taken unilateral action. Two Iranian companies were blacklisted by the US Treasury Department for supporting Iran’s ballistic missile program and two British businessmen were sanctioned for involvement with an airline used by Iran’s Revolutionary Guards.

Free Beacon: Iran reportedly carried out the mass execution of...

Russia will continue its nuclear energy cooperation with Iran

AP: A senior Russian official says his country is...