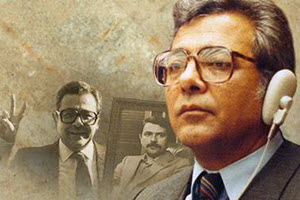 London, 25 Apr – Last Sunday, 24 April, marked the 26th anniversary of Professor Kazem Rajavi’s assassination. Professor Rajavi was a renowned defender of human rights in Iran and the elder brother of Massoud Rajavi, the leader of the organised Iranian opposition.

Professor Rajavi was 56 when he was killed whilst driving to his home in Coppet, a village near Geneva. The assassination was carried out in broad daylight by members of the Iranian government’s infamous Ministry of Intelligence and Security (MOIS). Extensive investigations from Swiss authorities found 13 Iranian government agents including former President and one of the richest men in Iran – Ali Akbar Hashemi Rafsanjani – to be involved in masterminding the assassination.

Professor Rajavi held six doctorate degrees in law, political science and sociology from universities in Paris and Geneva. He was an active advocate for a free Iran, establishing the Swiss Society for Defence of Iranian Political Prisoners in 1971 with Geneva resident Christian Grobet who went on to become head of government advisors.

Kazem’s brother Massoud was sentenced to death on political charges by the Shah. Kazem was able to commute the sentence to life in prison, and Massoud was released in 1979 during the Iranian revolution. Following the revolution Kazem was Iran’s first Ambassador to the United Nations. He resigned shortly afterwards in protest over the “repressive policies and terrorist activities of the ruling clerics in Iran”.

After his resignation he escalated his campaign against the programmes of arbitrary arrest and detention and mass executions in Iran. He was instrumental in the appointment of a UN Special Rapporteur for Iran and the first resolution on Iran at the UN Commission on Human Rights in Geneva.

Professor Rajavi’s life had been threatened before, once in a hall of the UN Headquarters a diplomat from the Iranian government shouted “we will kill you!” In 1986 the Supreme Leader at the time Ruhollah Khomeini issued a fatwa that Kazem was to be killed.

Kazem’s killers are wanted by Swiss magistrates on murder charges. Former Iranian intelligence minister Ali Fallahian is subject to an international arrest warrant, in relation to the murder.