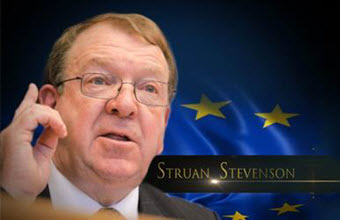 London, 25 Apr – Struan Stevenson, the President of the Brussels-based European Iraqi Freedom Association (EIFA) issued a statement on Sunday 24 April calling for the dismissal of Iranian “agents and proxies” from the Iraqi government and security apparatus. Stevenson also backed the idea of holding early elections in Iraq under United Nations supervision; to prevent intervention and influence from the Iranian government.

Stevenson said the 2014 Iraqi elections “by no means” represented “the democratic will of the Iraqi people”. The US and Iran were heavily involved in the discussions that brought former Prime Minister Nuri al-Maliki to power in 2006. Some international media reports say that al-Maliki had been investigated for his ties to Iran by the US Central Intelligence Agency and was the choice favoured by Qasim Suleimani, head of Iran’s Revolutionary Guards Quds Force, when Iraq came to form another government in 2009-10.

Dexter Fillkin’s profile of Suleimani in the New Yorker says Suleimani brought “senior Shiite and Kurdish leaders to meet with him in Tehran and Qom, and extracted from them a promise to support Maliki, his preferred candidate”. Maliki is now the Vice-President of Iraq, his successor as Prime Minister of Iraq is Haider al-Abadi.

Maryam Rajavi of the National Council of Resistance of Iran has said that Iran’s government is dependent on Bashar Assad remaining in power in Syria. An affiliate of state media outlet Mehr News reported earlier in April that at least 30 members of the Iranian paramilitary Bassij Force were killed fighting in Syria and Iraq. According to Rajavi, there are an estimated 60,000 Iranian forces and Iranian-backed foreign forces supporting Assad in Syria. Thousands of Afghan and Pakistani mercenaries and an unknown numbers of political operatives are also believed to be present.