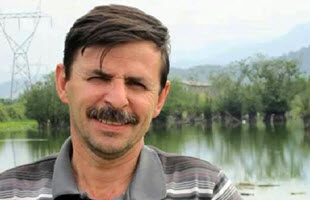 Tehran, 24 Apr – According to reports from inside Iran, imprisoned teacher Mahmoud Beheshti Langaroudi, a former secretary general and current speaker of Iran’s teachers union, issued a statement from Evin Prison (North of Tehran) saying that he began a hunger strike on 20 April.

Prior to his imprisonment, Mahmoud Beheshti Langaroudi had been arrested several times over the past few years alone and was reportedly physically and psychologically tortured during those arrests. His last detention dates back to 6 September 2015 when Ministry of Intelligence agents attacked his home and arrested him. Mr. Beheshti Langroudi has been sentenced to a total of 14 years in prison by Iran’s judiciary.

In his hunger strike letter Mr. Beheshti Langroudi said, “to protest the oppressive rulings by judges of the revolutionary courts, Salavati and Moghisseh, condemning me to a total of 14 years in prison, I will go on hunger strike on Wednesday 20 April 2016, until the government suspends this sentence and allows me a public and lawful court.” I will only have water, tea, sugar and salt. It must be noted that the responsibility of anything that happens to me during or after the hunger strike will be a direct result of all people who remained silent or indifferent against my appeal for justice. Why was I sentenced to fourteen years in prison?”

He pointed to the situation in Iran after the 1979 revolution until now and wrote “the revolution was won, but the optimism soon faded into an eight-year war, sustained poverty and empty coffers.”

“The war ended and the era for construction started. Authorities began to divide the spoils and their thirst for a share caused clear and widespread discrimination and salaries that were not reflective of the increasing inflation, and gradual gossips and protests.”

He added: “Rouhani’s government came to power … for educational staff who were ashes under the fire … and teachers, thanks to the telegram groups, started widespread activities and 100 to 200-strong groups were formed throughout the country, the result of their union was spontaneous sit-ins and rallies across the country without special leadership. These sit-ins and gatherings, which were in the middle of the road organized and supported by teachers’ unions were generally known as silent gatherings, … but with the entry of a part of the Revolutionary Guards into the issue of teachers, once again the wave of arrests began and a number of union activists including myself were arrested and sent to prison.”

Referring to the fact that none of the union activities were crimes, he said: “Unfortunately … it is more than 37 years that revolutionary courts have been addressing these cases illegally and in closed sessions, and due to their oppressive sentences, many innocent people have been imprisoned or are awaiting prison. I have been sentenced in three separate verdicts in these closed courts to 14 years in prison.”

The National Council of Resistance of Iran issued a statement on 8 September 2015, saying: “On 6 September 2015, the Iranian regime’s intelligence elements arrested teacher activist Mr. Mahmoud Beheshti Langaroudi and confiscated some of his personal belongings at his home. A day prior to his arrest (on September 5), he had raised teachers’ issues and demands with Mohammad Bagher Nobakht, speaker of Hassan Rouhani’s government.”

Ms. Soheila Sadeq, chairwoman of the NCRI’s Education Committee, called on international education organizations and teachers’ unions in various countries to condemn the “suppression” of teachers and “violations of their basic rights by the religious dictatorship” in Iran and to support the demands of Iranian teachers.

Shee added: “The decrepit and corrupt regime of velayat-e-faqih spends all the assets of the Iranian people on nuclear and anti-national projects and warmongering in the region and killings in Syria, Iraq, Lebanon, Yemen, and elsewhere across the globe. The lives of teachers and educational status of children and the welfare and prosperity of working people and the Iranian people do not matter to them. As long as this regime is in power, economic and social crises are going to get more severe every day. The overthrow of the religious fascism and establishment of democracy and popular sovereignty is a pre-requisite ending our crippling poverty, inflation and unemployment and improving our education system in order to provide a future for generations to come.”

The coronavirus situation in Iran is a long time...