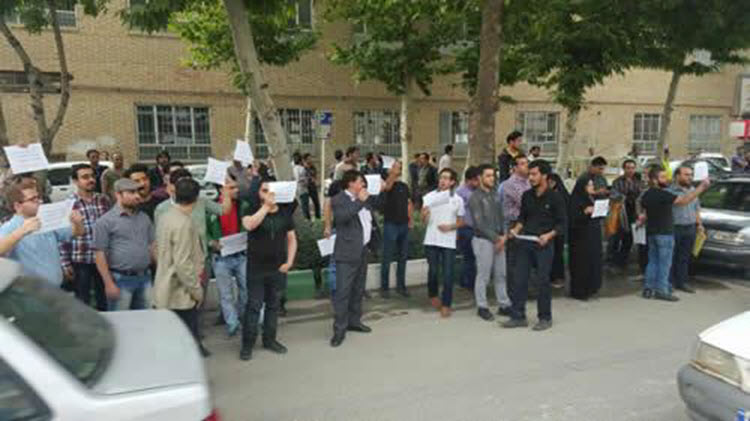 London, 14 May – Mashhad was the scene of a large protest on Thursday as over 1000 people gathered to demand their money back in relation to an investment scam, the opposition National Council of Resistance of Iran (NCRI) has reported. The protesters were investors in large stock companies such as Padideh Shandiz, a company supposedly specialising in international tourism development with close ties to the Islamic Revolutionary Guards Corps (IRGC).

Iran’s sanctions-riddled economy has put people in a desperate position. Some 120,000 investors were attracted by purportedly lucrative and safe investments in restaurants, attractions and construction projects of a Dubai-style tourist enclave. The reality however was much different.

The Padideh Shandiz Construction Company was founded by Mohsin Pahlevan Moghadam in 2009. In January 2015 the company was accused by Gholam-Ali Sadeghi, Mashhad’s prosecutor, of fraud worth $34.3 billion. Analysts have said that Pahlevan could not have operated a company at such scale without support from senior politicians and civil servants.

Padideh was registered as a private joint stock company with limited liability. Despite this the company sold stocks as a public company would. In the five years since it was founded the share price rose from 2,000 to 100,000 rials; upon the news of a fraud investigation the share price dropped by a fifth.

Sadeghi called the jump in share price fake and a bubble. Corruption is rife in Iran, with billions of oil revenues having gone missing during the presidencies of Mahmoud Ahmadinejad and Hassan Rouhani. Details of Iranian individuals have also been found in the Panama Papers.

The reaction of Iran’s people has been to take to the streets. Judiciary intervention has been made in order to ward off mass civil unrest over what protesters and Iranian opposition groups say is a trend of crime and pillaging by Iran’s ruling class.