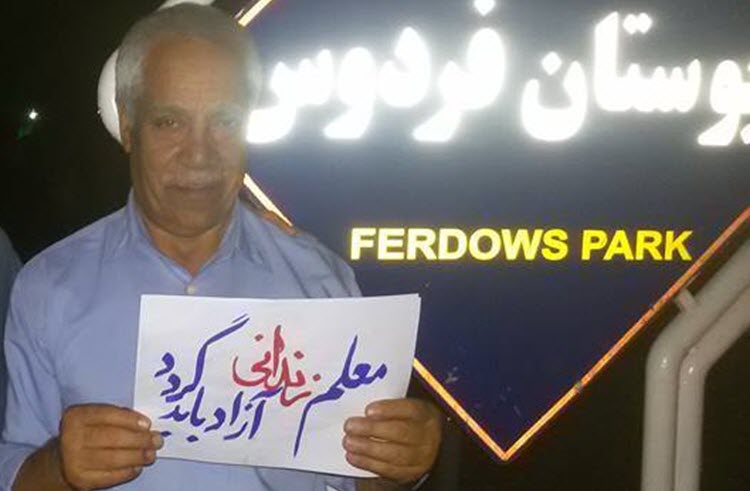 London, 27 May – A leader from an Iranian teachers’ union has warned the BBC of the campaigns of harassment and imprisonment they face at the hands of the Iranian government.

Hashem Khastar from Mashhad in the north-east of the country drew attention to the hunger strikes taking place in various prisons along with suppression of free assembly in the country. Khastar, who has been jailed three times for his union and activist work, says Iran’s teacher want democracy and are willing to face prison for their cause.

The British Trades Union Congress and other NGOs such as Education International have asked Iran’s government to respect the rights of teachers, however no response has been forthcoming.

“[I am] always prepared for the doorbell to ring and for someone to come and take me to prison”, Hashem Khastar told the BBC.

Iran’s government through its brutal rule has exiled, killed or imprisoned many opposition leaders and done its utmost to incapacitate networks and movements. As such it is hard to organise across the country, although not impossible. International efforts enabled through teacher’s associations and education initiatives are providing financial support and safe havens for those under threat from Iran- who’s policy on international interference is far less structured than many other countries.

“We do not accept security charges for civil activists. We believe that no teacher should suffer imprisonment for pursuing civil and educational matters. Prison must not be the answer to teachers’ demands”, says the Iranian Teachers’ Trade Association.

Decades of sanctions have decimated Iran’s economy. Teachers have not been protected from the poor living conditions and unpaid wages affecting other industries. What marks teaching as a unique occupation is its central role in shaping minds. Education International’s deputy general secretary Haldis Holst says the profession is a “target for control”. Things are not improving either, teachers are arbitrarily arrested and little information on their whereabouts or condition is supplied to families and their union organisations.

Financial Times: The head of the United Nations nuclear...