An overview of Iran during the presidency of Hassan Rouhani 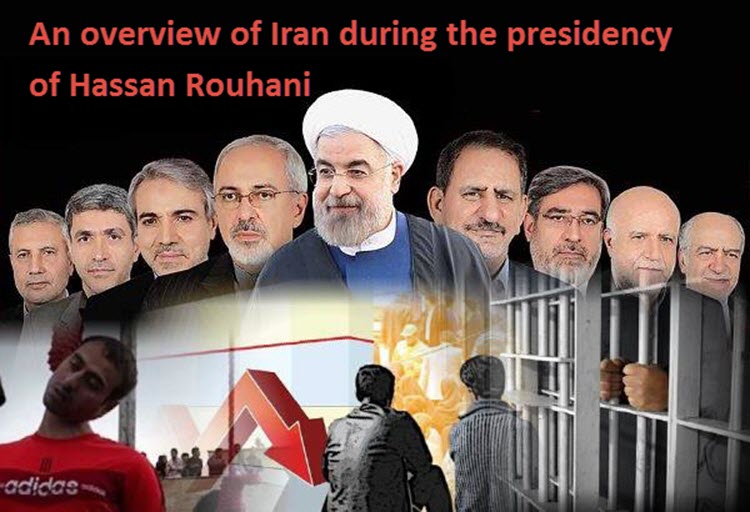 London, 1 Jun – Some in the West contend that Hassan Rouhani’s presidency in Iran has been fairly moderate compared to previous administrations, but this is simply not the case, according to the opposition National Council of Resistance of Iran (NCRI). The council has explored how Rouhani’s presidency has fared on important issues like human rights, terrorism, and the economy.

The UN special rapporteur for human rights in Iran, Ahmed Shaheed, announced that overall the situation has worsened considerably. Iran continually flouts the declaration on human rights, with rising executions, corporal punishment and the brutal treatment of women and minorities.

There have been more than 2,400 executions carried out in the past three years which exceeds that of any other three-year period since 1991; the number of executions in 2015 was double that of 2010 and ten-times that of 2005.

Amnesty International reports that Iran has the highest per capita execution rate in the world and that it is one of the few countries that continue to execute minors.

In 2014, Rohani described the executions as the implementation of “God’s will”.

The main victims of these state-authorised murders are political activists like Gholamreza Khosravi of the Iranian regime’s main opposition the People’s Mojahedin Organization of Iran (PMOI). He was executed for provided funding to a television station that supported opposition forces.

Iran is also notorious for its corporal punishment; more than 100 young people have been flogged for attending mixed gender parties in the last two weeks. Over three years, countless protesters, ‘moral code’ violators and prisoners have been sentenced to flogging.

Religious and ethnic minorities are routinely denied due process, and they continue to be executed at a higher than average rate; Iranian Christians are routinely arrested for gathering to pray.

Women also face a high-level of abuse and violence under the regime. In 2014, organised gang affiliated with the mullahs attacked at least 25 women by throwing acid in their faces. Later that same year, a woman defended herself against a rapist and was executed for it.

Support of terrorism and Islamic extremism

Iran is one of the main funders of the Syrian dictator Bashar al-Assad providing arms, over 70,000 troops and money to the Syrian regime forces. Last year, Rouhani defended Assad from brutality charges and denied knowledge of the use of barrel bombs against Syrian civilians.

He told CNN: “[In Syria] we have no solution but to strengthen the central authority, the central government of that country as the central seat of power.”

Agents of the regime ransacked the Saudi Arabia Embassy in Tehran and the Saudi consulate in Mashhad, northeast Iran in January.

In May, the Iranian Armed Forced Deputy Chief of Staff said that Tehran test-fired a high-precision ballistic missile with a range of 2000 kilometres. They also launched two rockets capable of reaching Israel in March. These violate the United Nations resolution 2231 which bans Iran’s regime from firing any nuclear warhead missile.

In 2015, they launched another two ballistic missiles and the UN Security Council’s Panel of Experts on Iran said: “[this] is a violation by Iran of paragraph 9 of Security Council resolution 1929.”

After this, Rouhani ordered an expansion of their missile programme.

The rate of unemployment in Iran is 70% in over 1000 towns in Iran and averages at 50% for Iran overall, over a million more than in 2013. The Minister of Labour estimates that one Iranian becomes unemployed every five minutes.

In May, Mohammad Soleimani, a member of the Iran’s Parliament, said: “During Rouhani’s term in office more than 15 thousand industrial and manufacturing units have been completely shut down and the remaining units are active with less than 50 percent of their capacity.”

The level of dissonance within Iran had risen sharply with growing numbers of protests, strikes and political prisoners. In May, the Supreme Leader Ali Khamenei told security officials that repressive measures were a high priority within the country.

Iran has no interest in US ties now: Khamenei

Los Angeles Times: As Iraq lurches toward elections this...