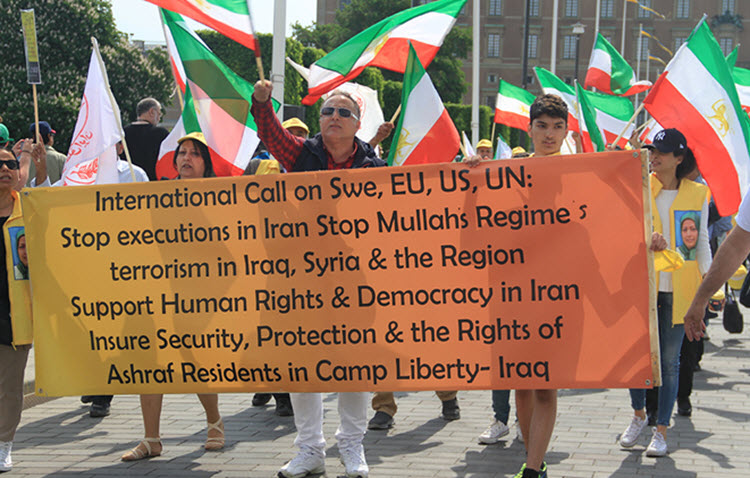 London, 2 Jun – Supporters of the Iranian opposition group People’s Mojahedin Organisation of Iran (MEK) held a protest on Wednesday outside the Swedish Parliament in Stockholm to raise attention to human rights violations in Iran.

The supporters of the National Council of resistance of Iran (NCRI) and the People’s Mojahedin Organisation of Iran were condemning the presence of the Iranian foreign minister Javad Zarif. They held up banners and some wore masks of Iranian officials with blood on their faces as seen in this report from NCRI.

They called on the Swedish government to make sure that any improvements to their political or economic relations with the regime would be on the condition that Iran’s human rights record improves, particularly a halt to executions.

The UN special rapporteur on human rights and Amnesty International estimate that in 2015 alone, Iran executed almost 1,000 people. Iran also has the highest per capita execution rate in the world.

In the Syrian conflict, Iran has supplied 70,000 troops and foreign militias to support Bashar al-Assad, according to the NCRI. The civil war could have ended, and Assad overthrown, a long time ago if the dictatorship wasn’t propped up by Tehran, it says.

Protesters insisted that Zarif must be held to account for the “crimes against humanity” committed by Iran’s regime.

This follows a similar protest by MEK supporters in Helsinki on Tuesday, who urged the Finnish government to make human rights a priority in its negotiations with Iran.

There is no doubt that Iran’s economic system is...

US urges Iran to free political prisoners, US hikers

AFP: US Secretary of State Hillary Clinton called on...