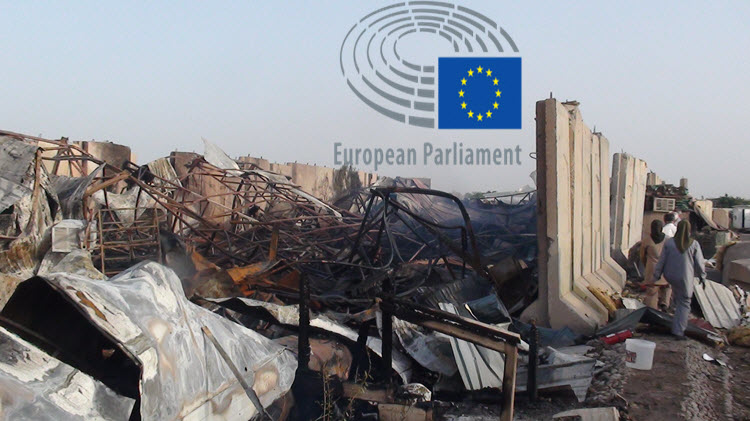 London, 5 Jul – Members of the European Parliament today called on the European Union and its member states: to condemn Monday’s missile bombardment of Camp Liberty; to press for an independent inquiry into the attack; and to act to dislodge the Quds Force of the Islamic Revolutionary Guard Corps from Iraq.

The Friends of a Free Iran group in the European Parliament, which enjoys the support of several hundred MEPs, strongly condemned “the terrorist attack against Iranian opposition refugees.”

At about 20:30, local time, on 4 July, a barrage of 50 missiles were fired at Camp Liberty, near Baghdad airport, home to unarmed members of the main Iranian opposition, the People’s Mojahedin Organization of Iran (PMOI or MEK).

Over 40 people were injured and large parts of the camp were set ablaze.

This was the fifth such assault. The MEPs said that “Camp Liberty has been systematically attacked by militias affiliated with the fundamentalist regime in Tehran. In October last year, a similar attack took the lives of 24 residents and left many more wounded.”

Moreover, the missile bombardment came more than a week into a siege of the camp which has seen Iraqi forces preventing food, medicine, hygiene products and fuel from entering the camp. This blockade by the Iraqi state has to be seen in the context of both temperatures of 50oC and fasting in the holy month of Ramadan.

The MEPs statement continued: “We call on the European Union High Representative and the member states to immediately condemn this brutal act against these defenceless refugees. This is clearly a crime against humanity as it is part of a systematic attack directed against a civilian population.”

The statement from Strasburg ended with a twin call for an enquiry and the expulsion of the Quds Force from Iraq. The Quds Force of the IRGC “regularly plans and executes terrorist plots against the civilian population,” according to the MEPs.

AFP: A number of cholera cases have been detected...