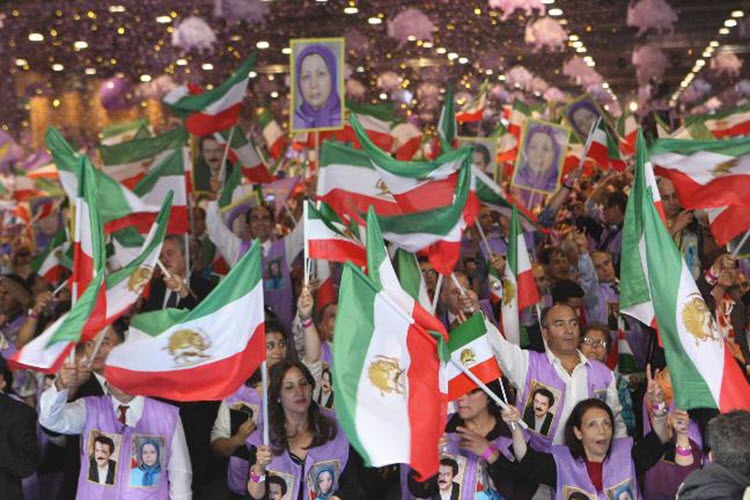 Iran has threatened to restart its nuclear program, to pressure the United States to release money to the terrorist regime. Alaeddin Boroujerdi, head of the national security and foreign policy committee in Majlis (the mullahs’ parliament), warned that Tehran would “resume large-scale uranium enrichment” if the regime doesn’t get the financial resources and support for its economy it desires.

“The Islamic Republic of Iran’s response to the other side’s non-compliance with the implementation of the nuclear deal will be uranium enrichment,” Boroujerdi was quoted in the Iranian state-controlled press as saying.

Senior Iranian regime officials have also restated their ambitions to destroy Israel with 100,000 missiles. Unfortunately, there is not much talk in the Western press about the destructive role Tehran plays in major scenes of conflict in the Middle East, including Syria, Iraq, Yemen, Lebanon, Palestine, etc. as it is directing all the ongoing savagery and carnage, and causing instability in the region.

On the one-year anniversary of the nuclear negotiations this July, the Iranian opposition’s skepticism in approaching Rouhani’s rise proves to be more accurate than ever.

Just after the nuclear agreement was signed last July, the Iranian opposition leader Maryam Rajavi declared that circumventing six UN Security Council resolutions and an unsigned agreement will not close the mullahs’ path to deception and access to nuclear bomb, but the “chalice of nuclear poison” and Khamenei’s retreat from his red lines will shatter his hegemony and undermine the entire regime.

Recalling that the Iranian Resistance was first to expose the clerical regime’s clandestine nuclear projects and facilities during the past three decades, Maryam Rajavi reiterated that Khamenei and his regime capitulated to the agreement out of concern over Iranian society’s explosive state, the debilitating impact of the sanctions, their impasse in the region and the prospects for a toughening in the terms of the agreement by the U.S. Congress.

Maryam Rajavi also underlined at the time: Had the P5+1 been more decisive, the Iranian regime would have had no choice but to fully retreat from and permanently abandon its efforts to acquire nuclear weapons. Specifically, it would have been compelled to halt all uranium enrichment and completely shut down its bomb-making projects. She further advised the P5+1 to insist on evicting the regime from the Middle East and prevent its regional meddling.

Maryam Rajavi called for strict United Nations monitoring to ensure the funds getting to Tehran would not further the regime’s policy of export of terrorism and fundamentalism in Syria, Yemen and Lebanon and fill the coffers of the Islamic Revolutionary Guards Corps (IRGC).

Foreseeing the rush of European delegates to Tehran to strike lucrative deals with the Iranian regime, Maryam Rajavi stressed that any agreement that disregards and fails to underscore the Iranian people’s human rights will only embolden the regime in its suppression and relentless executions, abuse of the rights of the Iranian people, and violations of the Universal Declaration of Human Rights and the United Nations Charter.

Once year since the nuclear agreement, we can clearly see that Maryam Rajavi’s predictions have all come true. The hope of moderation in Iran under Hassan Rouhani has proven as false as it was naïve.

More individuals have been executed under Rouhani’s tenure than in any similar period in the past twenty-five years. Rouhani has stepped up repression of women under the pretext of mal-veiling describing Iranian women’s defiance of the compulsory dress code as a national security threat. They have also begun medieval punishments including amputation of limbs, eye-gouging and the vicious flogging of youths in public.

On the anniversary of the Iranian nuclear deal, Western powers are wise to conclude that the global shift to a pro-engagement policy with Tehran served a regime that has rightfully earned decades of scorn for human rights violations and condemnation for support of global terrorism. Such policy has also worked against individuals promoting freedom, democracy, human rights, gender equality, the rule of law, and a non-nuclear Iran.

In a June 11, 2016, ceremony called the Night of Solidarity with the Syrian People and Revolution, held at the office of the National Council of Resistance of Iran in Auvers-sur-Oise, France, Maryam Rajavi explained, “Since (the mullahs) do not see any viable future for themselves, they continue to execute people in Iran and spill the blood of people in Syria to protect their petty interests.”

Maryam Rajavi underlined her movement’s diametric opposition to the regime ruling Iran and announced, “We, the Iranian Resistance, declare the month of Ramadan as the month of solidarity with the strong and resistant people of Syria. Tonight in this gathering for Iftar, we are thinking of Syria– blood-drenched and injured –and we pay tribute to the heroism and steadfastness of its great people.”

Maryam Rajavi said: As a result of the developments in Syria, Iran’s ruling religious dictatorship can no longer claim in the region that it defends Islam, because it has been revealed that it is an aggressive regime willing to drown the region in blood to protect its own shaky rule.

Let’s see what the Iranian regime has done in the region.

In Iran, (the mullahs) executed thousands upon thousands of the most progressive Shiite youths, but abroad, they pretended to be defending Shiism. They provoked sectarian strives between Shiites and Sunnis to spread terrorism and fundamentalism. They dispatched their hand-made groups like the Hezbollah of Lebanon to attack the people of the Middle East. Khamenei’s headquarters in Tehran directed the hostage-taking of western nationals in Lebanon to use them as pawns in their deals with Western governments and to compel them to placate their religious fascist regime.

Maryam Rajavi believes that the mullahs struck the worst blows to the cause of the Palestinian people. They had a counterproductive role by dividing the people of Palestine and promoting hostility to Middle East Peace.In Iraq, under the banner of export of revolution and Islam, the mullahs have divided the country and driven it towards total destruction and disorder.

She emphasized that Daesh (ISIS/ISIL) has been the product of the clerical regime’s suppression of the people of Iraq and massacre of the people of Syria with the help of Nouri Maliki and Bashar Assad. Maryam Rajavi reiterated: If Iran’s ruling mullahs had not interfered in the affairs of Iraq and Syria and committed their crimes, the ugly phenomenon of Daesh would not have spread in the Middle East, nor would the terrorist attacks take place in France and other countries.

Maryam Rajavi said: Velayat-e Faqih and Daesh are two sides of the same coin. This is why we have always emphasized that so long as the Iranian regime is not countered, the terrorist crisis in Europe is not going to be uprooted.

After eight days of an inhumane blockade which deprived the Iranian opposition members from food stuffs, medicine and fuel, militias affiliated with the fundamentalist regime in Tehran launched a barrage of 50 missiles at Camp Liberty near Baghdad, on July 4, 2016, just as the freedom-fighters were about to break their fast in the month of Ramadan.

At least 50 residents suffered injuries in the blasts. Many residential trailers and infrastructures were totally demolished.

Hailing the Liberty residents for their perseverance and wishing quick recovery for those wounded, Maryam Rajavi underlined that the missile attack demonstrated that the religious dictatorship ruling Iran is terrified of the People’s Mojahedin Organization (PMOI/MEK) and the Iranian Resistance, which it views as an existential threat.

Maryam Rajavi noted that the mullahs’ regime opposes any solution for Camp Liberty that would ensure their safety and security and tries to obstruct it. The only acceptable options, as far as the regime is concerned, are to either compel Liberty residents to surrender and abandon their struggle or to physically eliminate them.

Maryam Rajavi said: Now that no doubt remains as to the Iranian regime’s intentions to cause more bloodshed at Camp Liberty, there is added urgency for the United States and the United Nations to take action to guarantee and provide security and safety for the residents of Liberty until such time when all of them have departed Iraq.

In an article published by the American Thinker, Ken Blackwell, the former U.S. Ambassador to the United Nations Human Rights Commission, recently wrote that Maryam Rajavi and NCRI’s ten-point plan calls for “standing up to the egregious conduct of the Iranian regime, fighting the Islamic State, facilitating the removal of embattled regional dictators like Bashar al-Assad, and making sure that the peoples of that region have strong, recognizable alternatives to the extremist groups currently vying for dominance.”

Maryam Rajavi’s ten-point plan “includes the establishment of truly democratic governance in the Middle East, the separation of religion and state, an end to institutional misogyny, and the promotion of other principles that hold equally obvious appeal for all Americans, and indeed for all civilized peoples of the world,” Ambassador Blackwell continued.

According to Ambassador Blackwell, in pursuing “the universal imperative to confront the threat of Islamic extremism,” the Iranian opposition and the NCRI led by Maryam Rajavi had already united “officials from several presidential administrations” of both parties in “common cause” against fundamentalist terrorism. Citing Maryam Rajavi, he said that “moderate democratic Islam is the antidote to the violent conduct of extremists.”

In a couple of days, the Free Iran rally in Paris will see Iranians join “a bipartisan American delegation, along with delegations from the EU and various nations of the world,” together with “the moderate Syrian opposition and other anti-Islamist movements,” Ambassador Blackwell said.

The timing of the international demonstration for freedom and the anniversary of the negotiations that resulted in the Joint Comprehensive Plan of Action with Iran provides a unique opportunity for Western policymakers to reconsider the optimism that resulted in the nuclear deal, as well as unfortunate developments since 2015.

It is clear that last July’s optimism was misplaced and that Western policy toward the Islamic Republic must change. Western support for a regime engaged in repressive and destabilizing activities in Syria and Iraq – resulting in forced migration with global security implications – is not sustainable or sensible. It is a good time to conclude that regime change from within via Maryam Rajavi’s organized Iranian opposition is also the best hope for a more peaceful future in Iran.

Amir M. Emadi, MBA, is Spokesperson and Advisory Board Member of the Organization of Iranian-American Communities

Maryam Rajavi’s message of consolation and unity to France