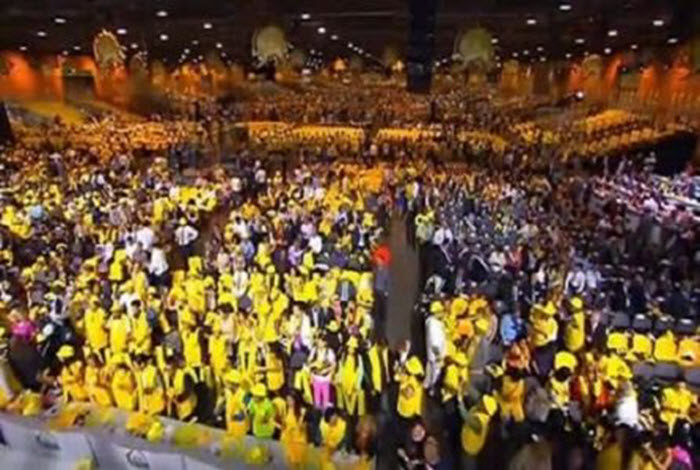 London, 11 Jul – According to Greg Russell, reporting for The National on 10 July, the crowd who gathered for the “Free Iran” convention at Le Bourget, Paris, this past weekend, could have filled Murrayfield Stadium twice over. More than 100,000 gathered together to send a message to the current Iranian regime: they want change.

Crowds from across the world, including politicians and government officials from Canada, the United States, Europe, and the Arab nations, joined tens of thousands of Iranians in exile, as well many other Human Rights activists.

Ingrid Betancourt, a Colombian-French former politician who was held in captivity for six years, herself, told an emotional story about an Iranian daughter’s plight. “This girl was eight and living in a valley in Iran when some uniformed men came to see her father one day,” she said. “They took him away that day. It was 18 years ago and the only time she can see her father is on her weekly visits to the prison where he is still held. She waits, like many others, in a line outside the prison to see her father for 20 minutes every week.”

Heartbreaking video footage of the people still in Iran, their faces covered, each holding a red rose, symbolic of freedom, adopted as the logo for this event, was viewed by the crowd, after which Maryam Rajavi, President-elect of the NCRI spoke.

Through the cheering and applause, she explained how, in the year since the current regime signed their nuclear agreement, they’ve failed to solve the economic crisis, and supported the Syrian war, instead. Additionally there’s been an escalation of repression, discrimination, arrests, and executions.

According to Russell, “Rajavi said that, “We offer a solution that is the only effective option and the most indispensable and attainable solution: the right of the Iranian people to overthrow the religious dictatorship and attain freedom and democracy must be recognised,” she said, adding that it would also signal a breakthrough for Iran and the world. She added that, “Many elected representatives of people throughout the world, as well as senior US, European, Australian, Canadian and Asian personalities and dignitaries – who support freedom and democracy in Iran – proudly attest to this reality.”

Under Rajavi’s 10-point plan for the future, Iranians would have full democracy, equality for men and women, abolition of the death penalty, and the separation of church and state.

In conclusion, she said, “We will not relent until the day when Iranians of all persuasions and divergences can join hands to hoist the flag of victory, the flag of a free and democratic Iran.”

A path to lasting peace