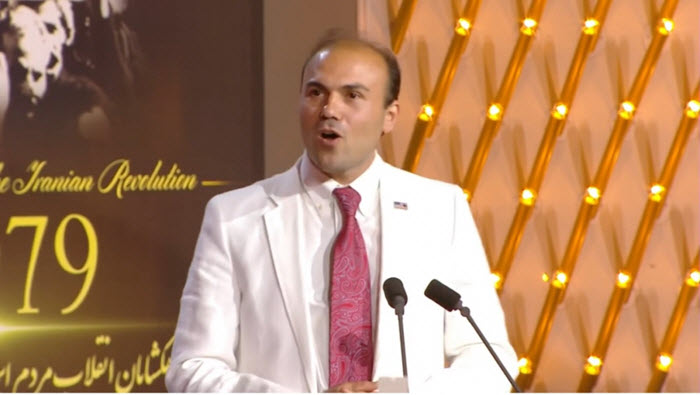 London, 11 Jul – Iranian-American Pastor Saeed Abedini spoke before 100,000 people in Paris at the National Council of Resistance of Iran rally on Saturday, where he vowed that through faith in Jesus Christ, the “resurrection of the Iranian people” is coming soon, wrote Stoyan Zaimov, a Christian Post Reporter, in his July 11 article.

Pastor Abedini went on to say: “My presence here proves that each act of resistance will be a victory. A victory for freedom. The message of God in the Bible says that we should resist the face of tyranny.”

After spending three and a half years in an Iranian prison for his Christian faith, the American pastor was finally released in January as part of a hostage-prisoner exchange. Although he was beaten and pressured to renounce his Christian faith while imprisoned, he refused to do so. Abedini hopes that one day all will be able to celebrate a “free future for Iran, a bright future.”

The National Council of Resistance of Iran (NCRI), is seeking to establish freedom and democracy in Iran. This weekend in Paris, at the “Free Iran” conference, they brought together speakers like Abedini, including many other high-profile American guests such as former Speaker of the United States House of Representatives, Newt Gingrich, the former ambassador to the United Nations, John Bolton, and former FBI Director Louis Freeh.

Maryam Rajavi, president-elect of the NCRI, said: “Their expectation of the next U.S. president, as with other Western leaders, is to abandon the policy of appeasement, which emboldens the Tehran regime to intensify the suppression of the Iranian people while continuing the policy of exporting terrorism to the region.”

“We will soon see this rebellion in our country, in our hearts, and in our world, because Jesus Christ is bringing this message. The resurrection of the Iranian people shall arrive very soon,” Abedini declared. He recalled that while he was in prison, he was told “for you it’s the end, you will never get out of this prison.”

But he did, and his message to the Iranian people, is that they must be given the choice to elect their own leaders. “The Iranian people are much more modern and ahead of [their] leaders. The people should be able to choose their friends, their religion, and its time to stop the slogans against America and Israel, we love them both,” he added.

Abedini further reminded the audience that God is “always close to the oppressed.”